Want to go faster? Time for your car to go on a diet.

The first in our “The Automotive Weight Loss” series, today we look at your doors!

During a recent underbody restoration on the 1999 Mitsubishi Evo 6, we built a homemade car rotisserie so we could remove rust from the car. To get the car ready for its journey from four to zero wheels on the ground, it was important that it be as light as possible, so we ended up removing every single part (seriously). Since everything had been stripped from the car, it was easy for us to see how much everything weighed. Of the heaviest items removed from the car, the doors came in at 50 lbs each for the rears and the fronts. This was no good, because we recently decided to transform it into a time attack car.

The beast needs to go on a diet. 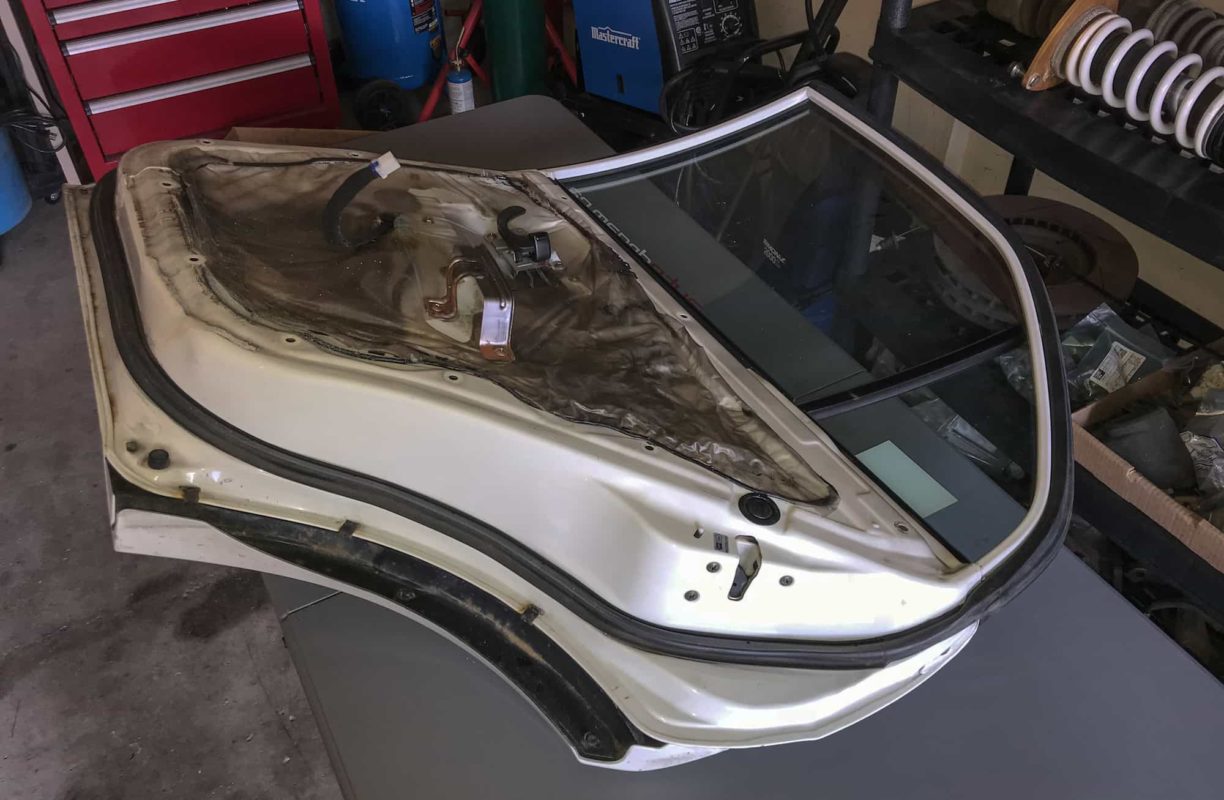 The rear door, removed and ready to be gutted.

For the doors, we are going to remove all electronics from them, replace the glass with Lexan, and construct new door cards out of ABS plastic. The first step in all of this was to remove the door cards. A few screws later and they had easily popped off. Next was the removal of the doors. This required disconnecting the electrical connectors for each door, unbolting the hinges, and carefully lifting the doors off of the car. With that all done, we set about gutting the doors.

For this post, we will simply show the work done on the rear door, but the same applies for the fronts. 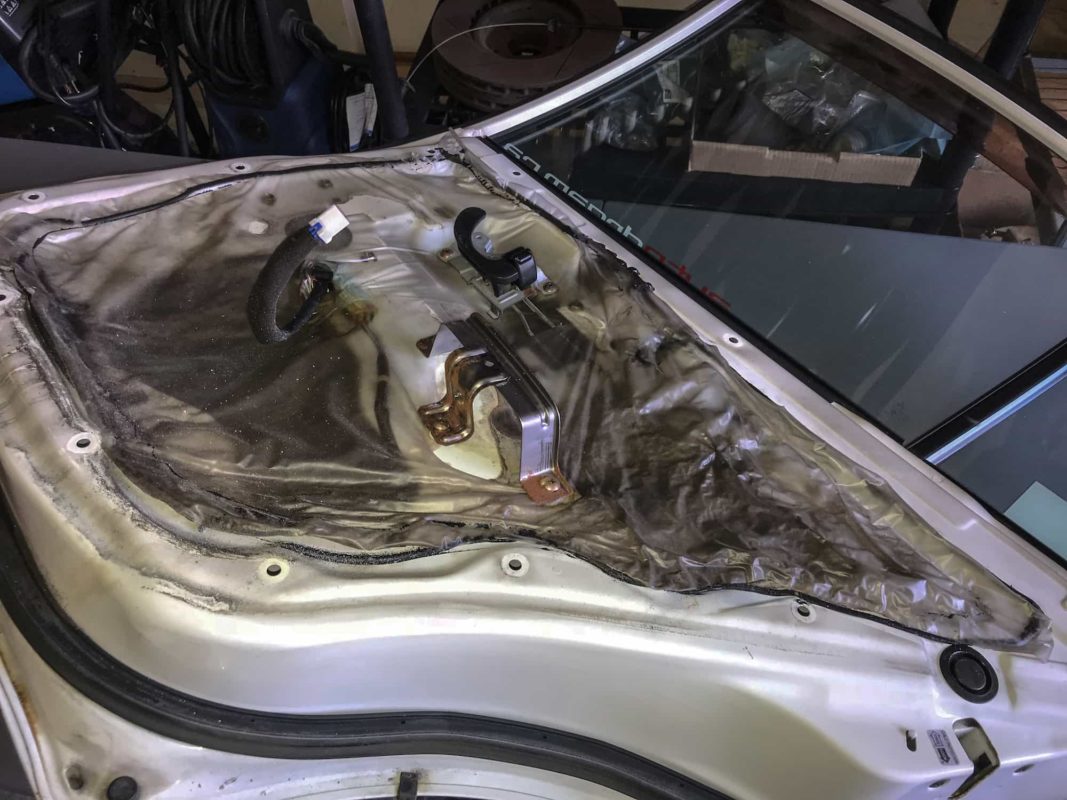 The plastic dust shield inside the door. 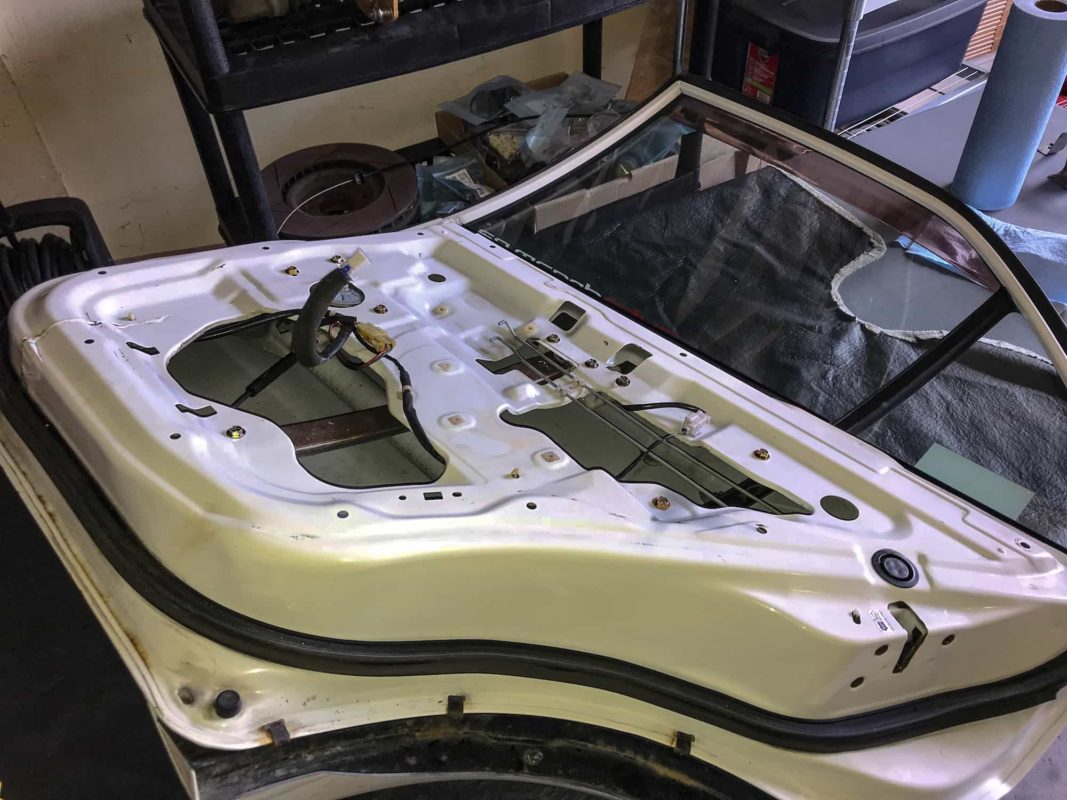 The plastic dust shield removed from the rear door.

Kicking off your door diet

This may seem like an intimidating process if you’re just getting started, but honestly it’s well worth it if you want to shed the pounds. Start early enough in the day and you can probably wrap up by the evening.

The first thing we removed was the plastic dust shield that was hiding all the internals. The glue used on this is a pain in the ass, but if you make a ball out of it you can use it to pull more off. After that was all removed, a quick shot of Goo-Gone followed by some degreaser helped to clean off any remaining glue. 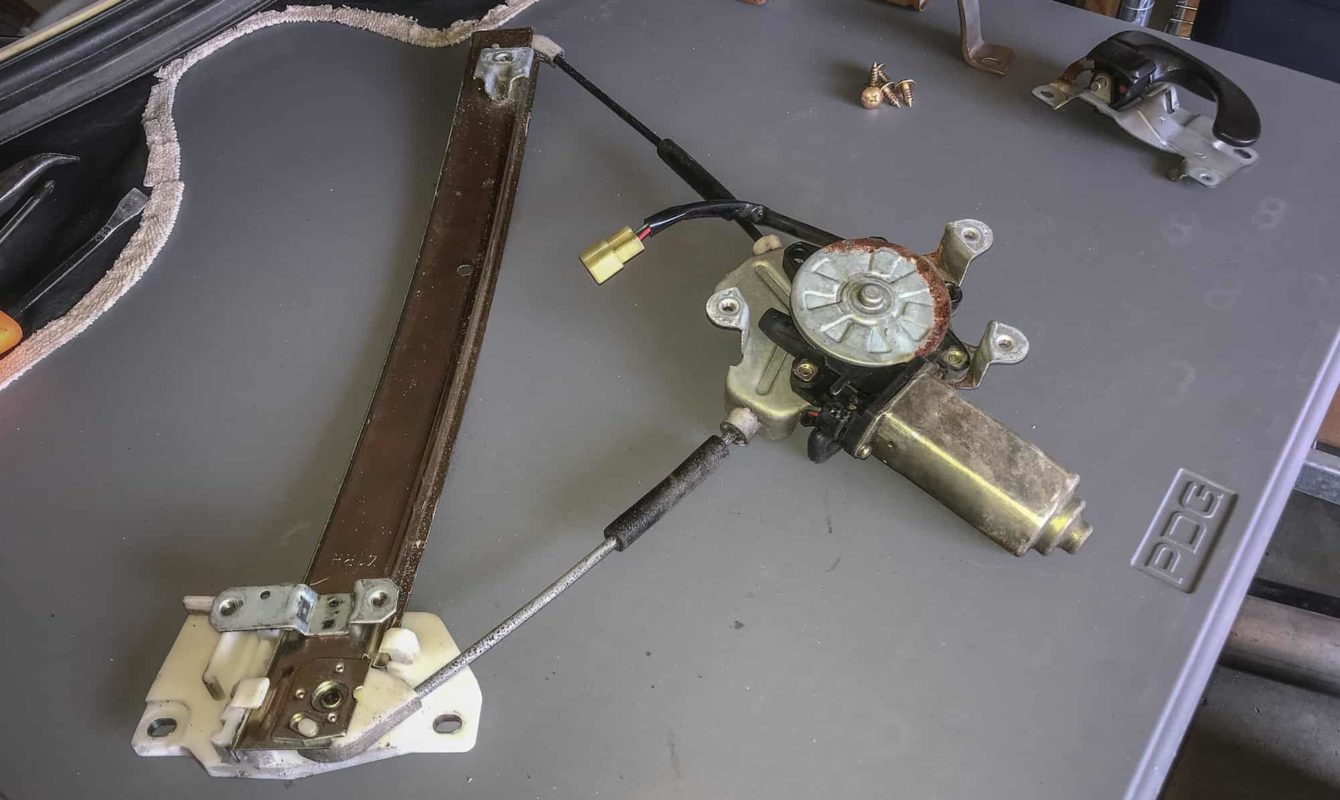 The window regulator and track removed from the door.

Two screws attach the window glass to the regulator and track. After unscrewing them, 5 more bolts hold the track and the motor to the door. With these removed, and a quick disconnect of some electrical connectors, the regulator and track can now be removed. Be prepared for a bit of a struggle as you try to find the best angle to pull it out. 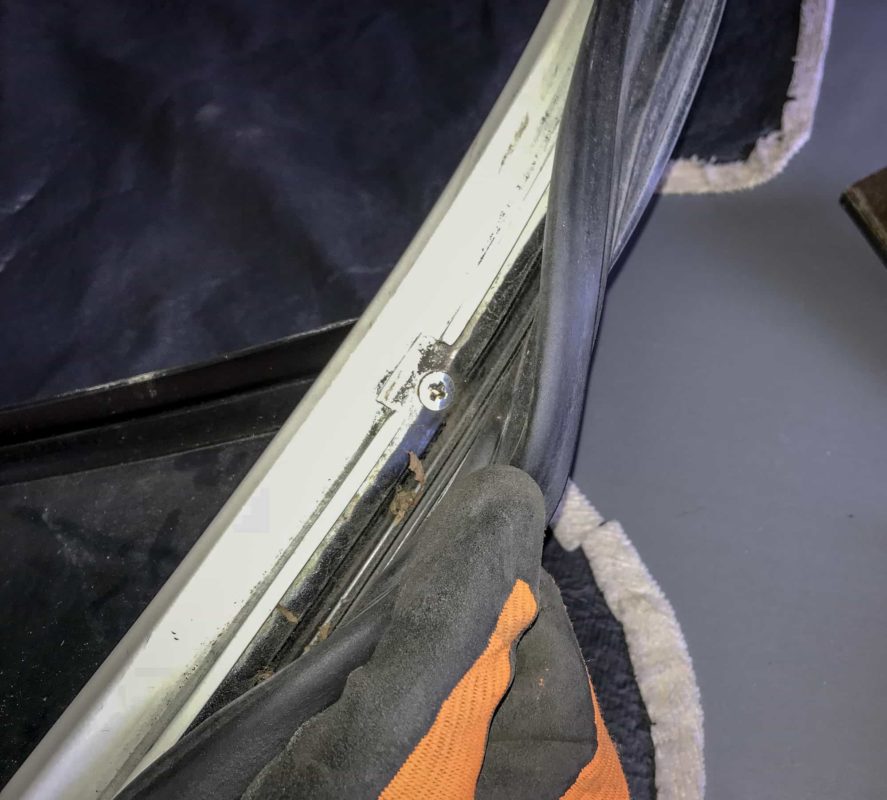 The hidden screw attached to the window sash (yes, it's called that). 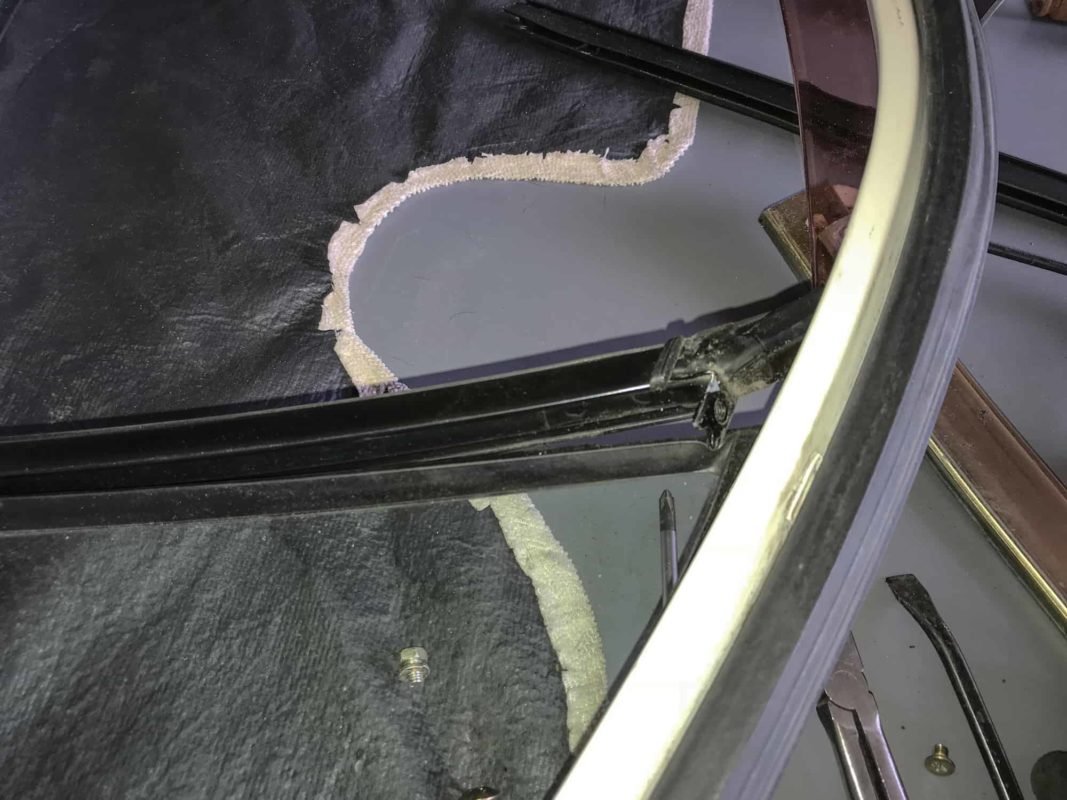 The window sash being removed from the door. 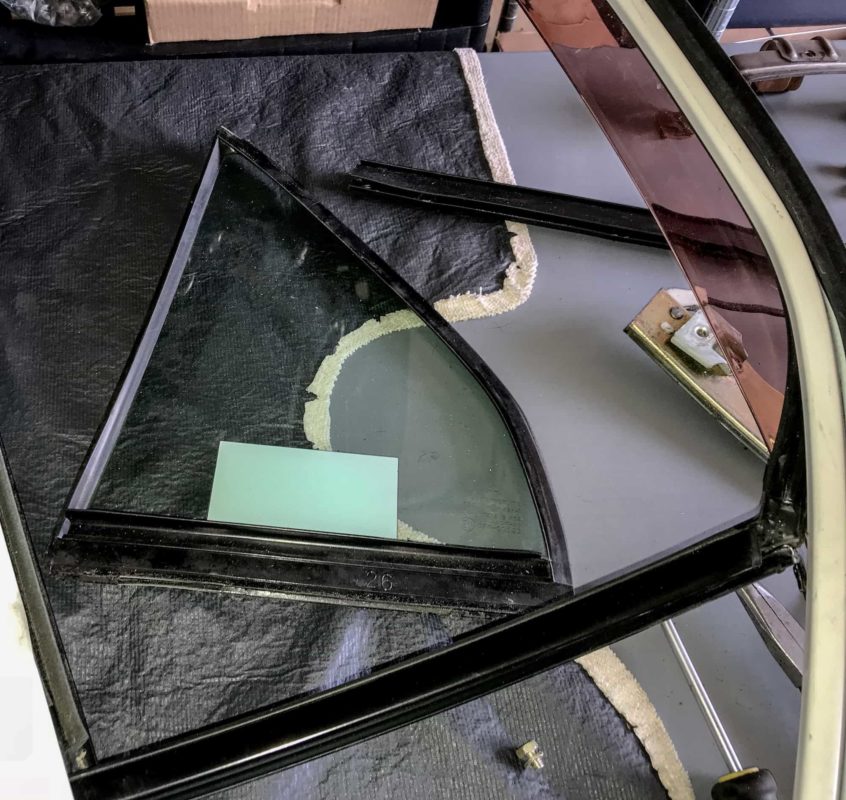 The small window pane removed from the door. 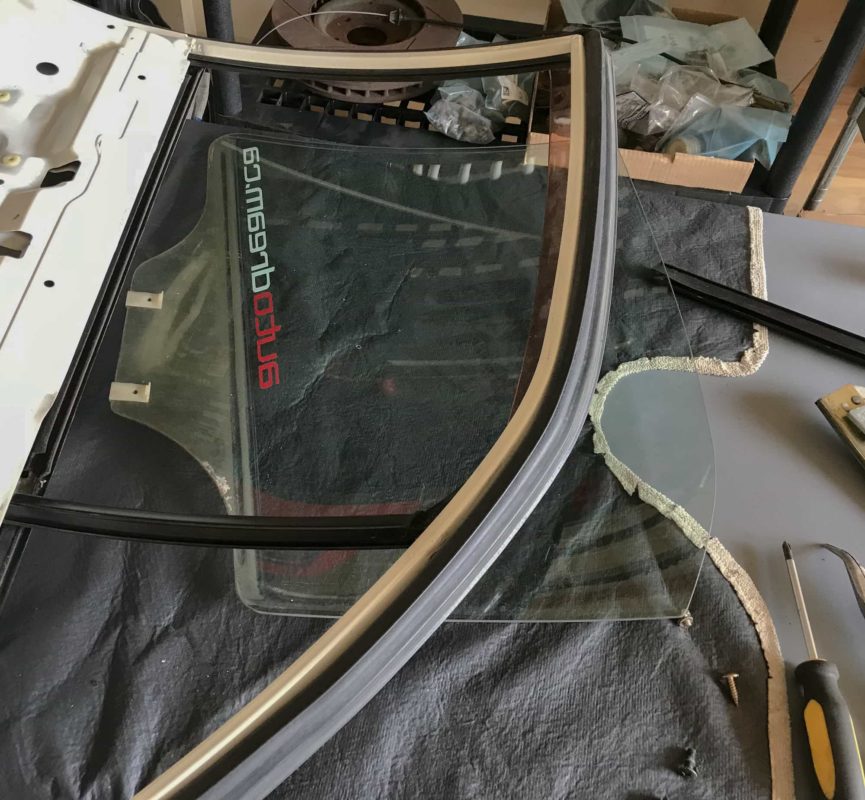 The large window pane removed from the door.

After this, we moved on to removing the glass. Under the door seal, there’s one lone screw hiding out that holds the sash (yeah, we looked this up and it turns out that what it’s called!) to the outside door frame. Another two bolts attach the bottom of the sash to the door panel. With these removed, the sash can be moved around, giving enough space for the small rear pane of glass to be removed. After it is out, the larger pane can then be removed. These were put in a safe place for later as they would be used to make the templates for the Lexan. We’ve got another post coming up that will explain Lexan window construction. 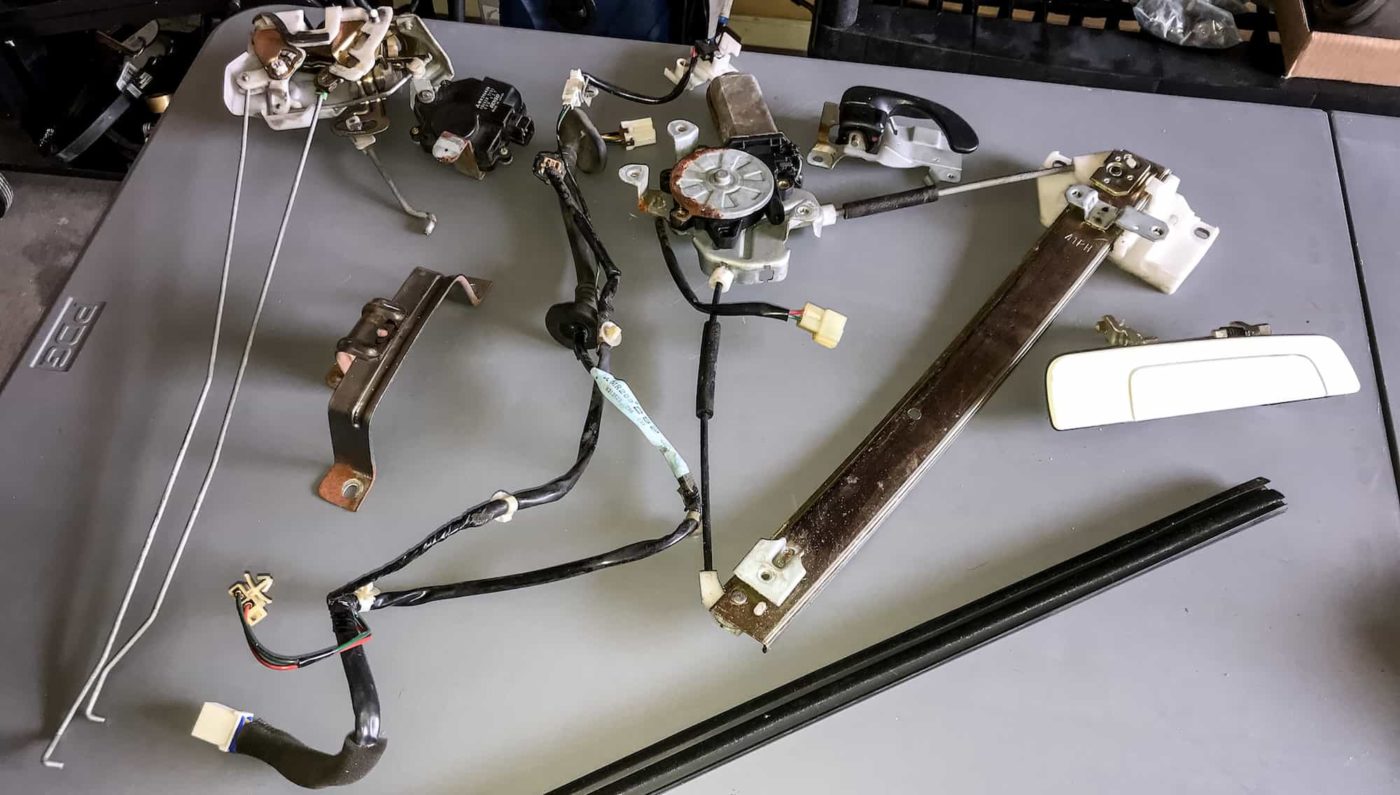 All the rear door internals removed.

With the windows now removed, only the lock mechanism and the door wiring remained. The wiring is held in with a few plastic clips that can easily be removed with a pair of needle nose pliers. As for the door lock, we decided to pull the whole mechanism out and remove the electric solenoid, but if you want to keep it simple, just leave it in there. It’s quite a pain to remove all the internals as they are attached to the exterior door handle. Either way, the door handle on the inside needs to be removed for when the template is being made. 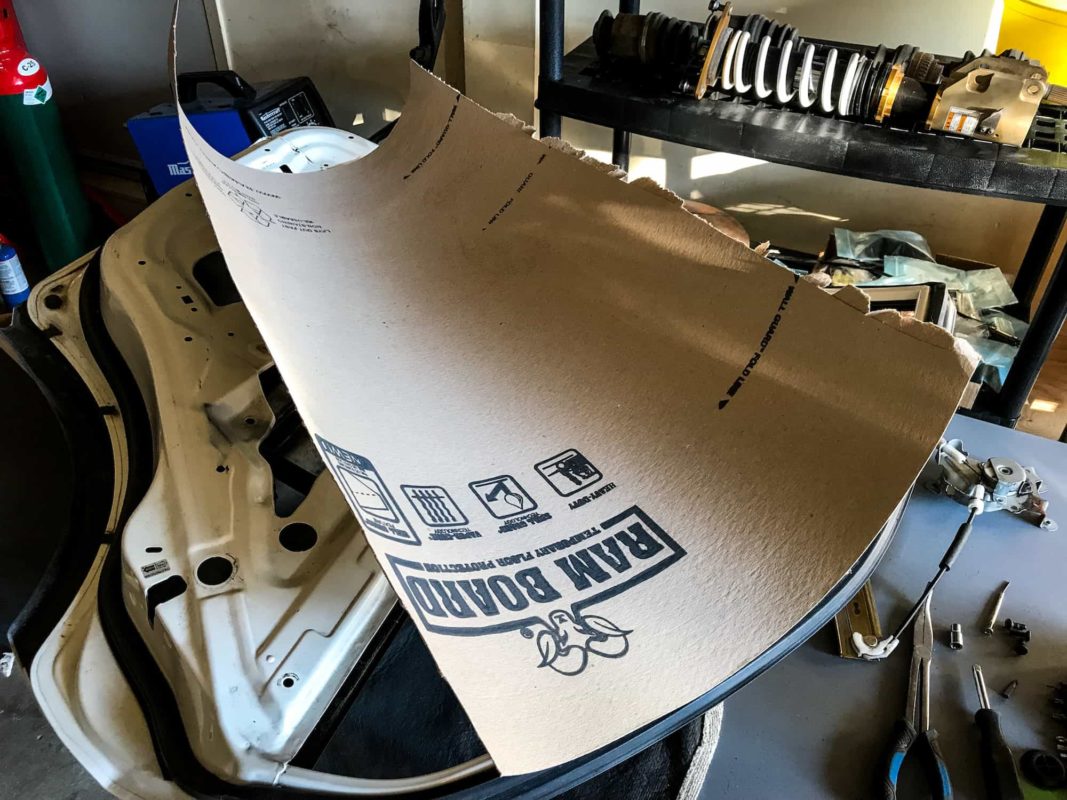 Ram board used to make the template for the door card. 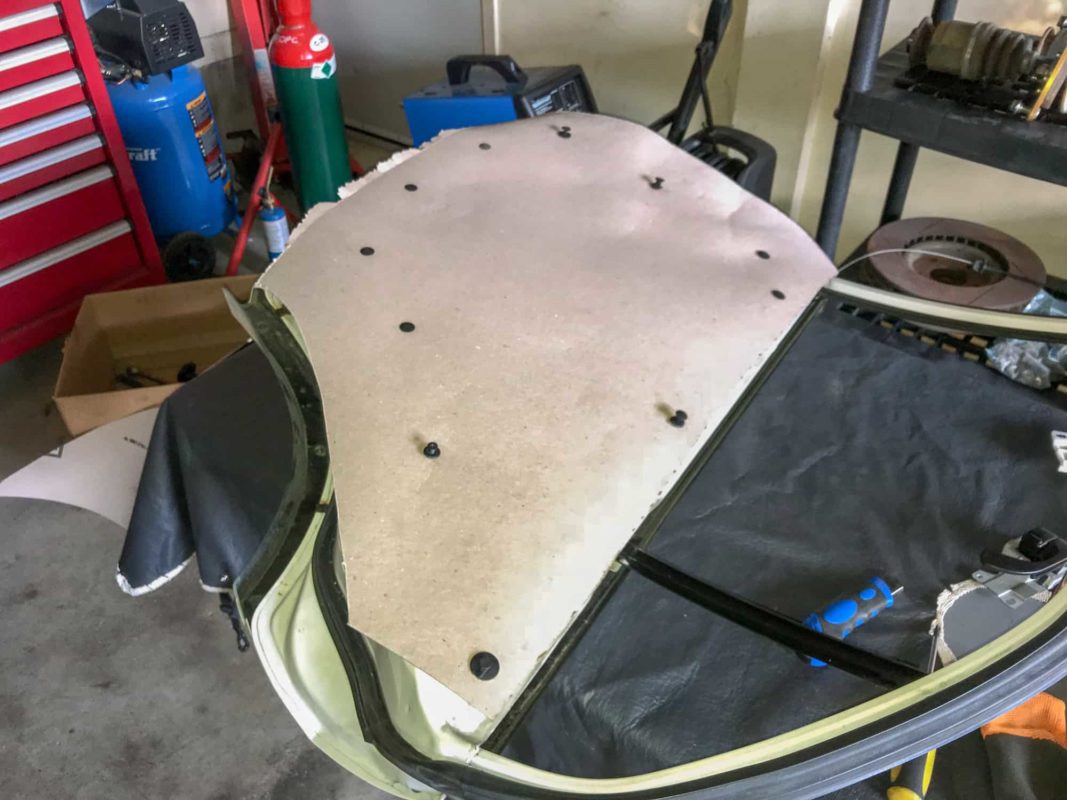 Ram board cut to make our custom door card template.

Then you make a template

The best things in life are usually worth doing more than once, and the same thing goes for your car’s new door diet. You want all your shiny new door cards looking the same when you’re done, so the worst thing you could do is try to save a bit of time up front and try to cut plastic mounted to your actual door frame. That’s not how we do things at Brain Power Motorsports!

To get these door cards fitting perfectly (and ensure we only had to cut plastic once per door), we made up a template that was sturdy enough to stand up to the tough demands of garage DIY-ing. We used a roll of Ram Board, a contractor type of cardboard used for protecting floors, and highly recommend you do the same. After cutting out an initial piece, we placed it against the door and started to poke out holes where the plastic clips used to be. We used a bunch of spare plastic clips to attach the cardboard to the door. (Put your door on something non-abrasive so you don’t have big gouges in the paint when you pick them back up). 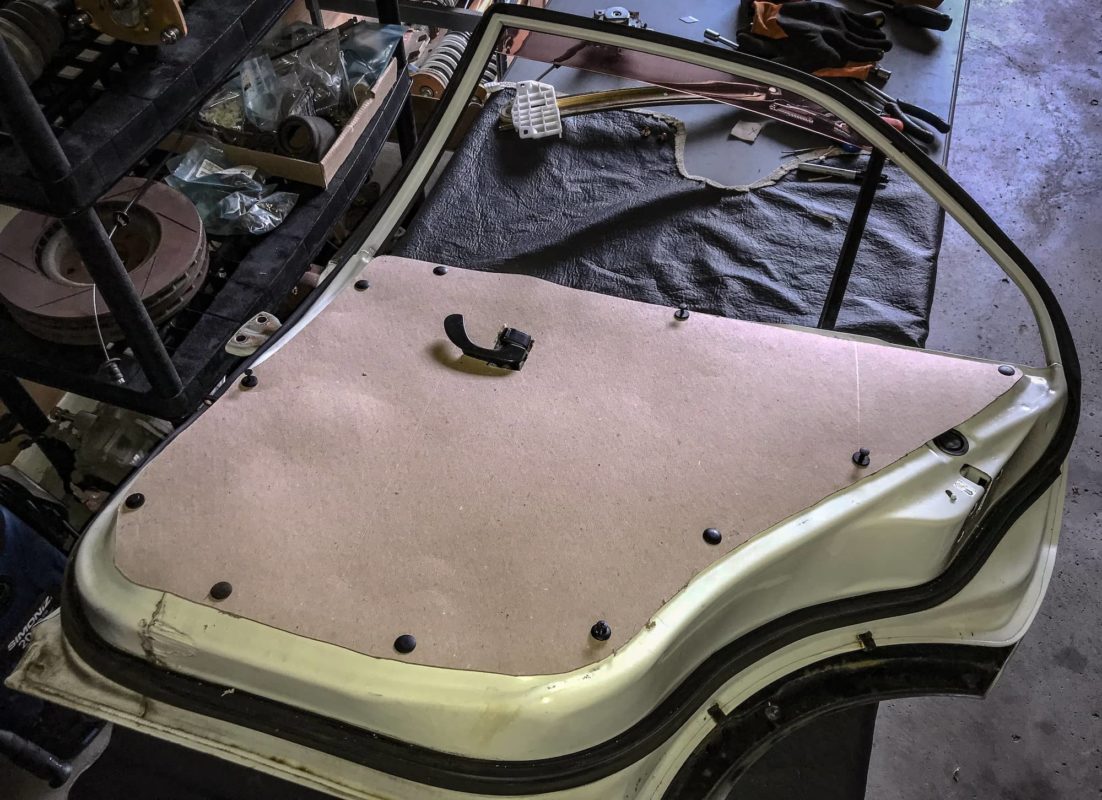 The cardboard template, all cut and ready to transfer.

After the piece was secured, we used a utility knife to cut out the shape of the template. It’s important to go slow with this process and be careful not to scratch the door paint while cutting the piece out. After the template was all cut out, it was removed from the door, and the door handle was screwed back on. The template was then put back against it, and a hole for the handle was cut out. 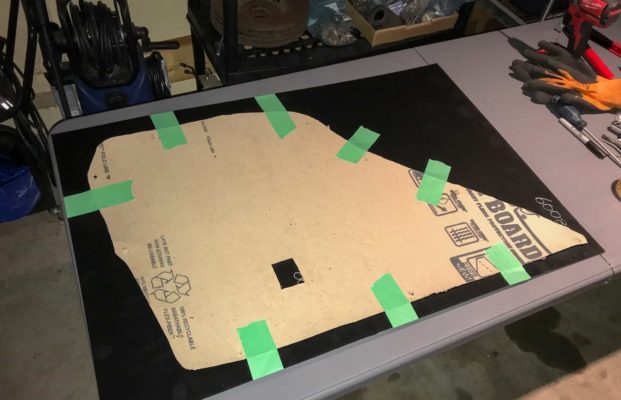 We put the now complete Ram Board template against a thin, 1/8” piece of black ABS plastic. We traced the shape on to the plastic first, and then further carved it out using a utility knife. The holes were also drilled into the piece while it was still attached to the template.

Since the sheet was really thin, a knife was all that was needed for cutting out the door card. Simply carve out a bit of the plastic, and then break the pieces off. As long as the shape has been carved into the plastic, it will break into the shape you want. Finish the edge off with some sanding, and you have yourself a new door card! 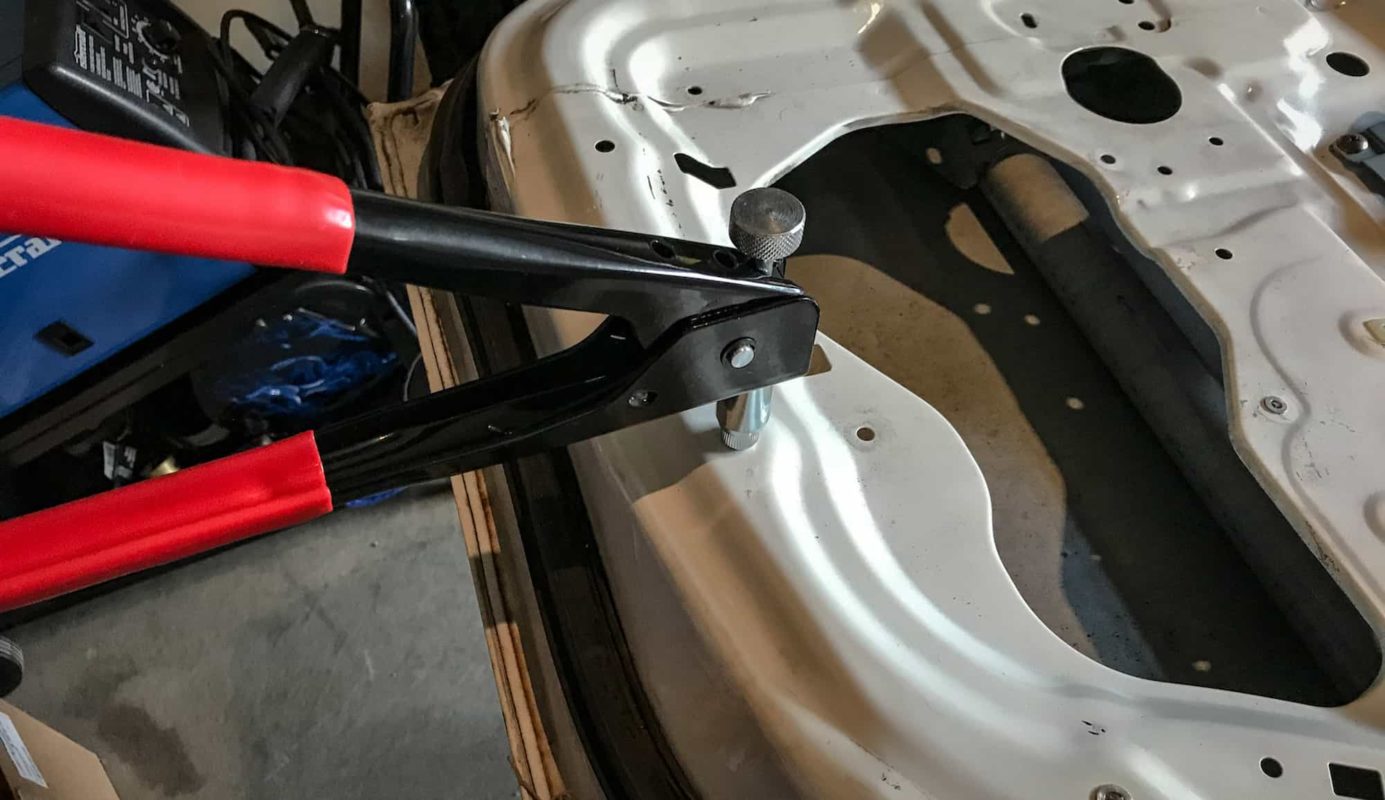 Installing threaded rivets on the door.

Final step: mount the door card to the door frame

At this point, you’re on the home stretch (for your first door), so congrats! The first door takes the longest, but once you know where your screws and clips all are, doors 2, 3, and 4 should be a breeze. Our final step is to mount the card to the frame, and then you can step back and admire your work!

To secure the door card, we opted for threaded rivets. Using a handful of #10-24 rivets placed into the pre existing holes, and matching button head screws, we had an easily removable solution for mounting the door card. Though the finished panel may not be as appealing as a carbon fiber door card, it was a cheap and easy solution for covering up the door. 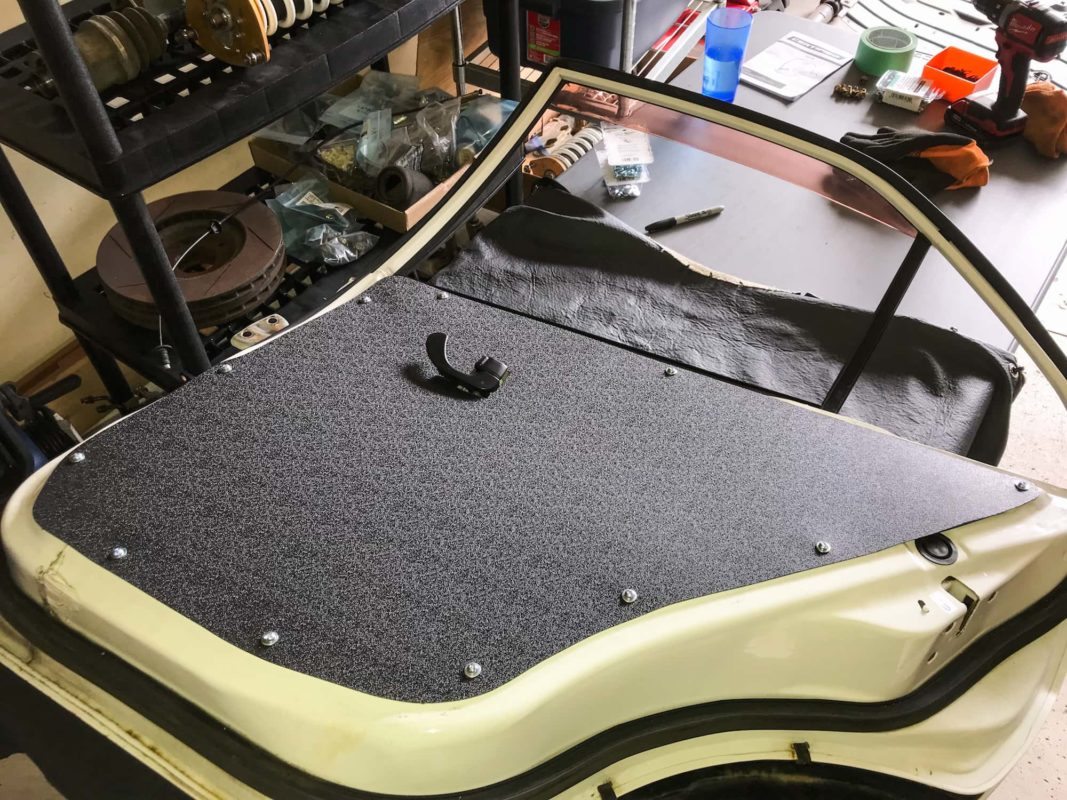 When all was said and done, the rear doors had shed 16 lbs each. Of course, the Lexan windows are still to be added, but they should only add a few pounds each. It was a quick, easy, and cheap project that required few tools and caused almost no headaches. Whether you’re making a time attack car or you just want a quick and easy weight savings project, removing unnecessary internals is a great start. Sure, the door could have been left uncovered, but we still wanted the interior to be a little attractive. Next up will be the Lexan windows and NACA vents for the rear windows.

If you enjoyed this article, got some value out of it, or if you have a question you want clarified, hit us up in the comments section below!