Never miss a moment of the build.

It was one of those days where a wrench could have easily been tossed through the car window out of anger. We tried to tackle the crank pulley bolt! And it did not go well. 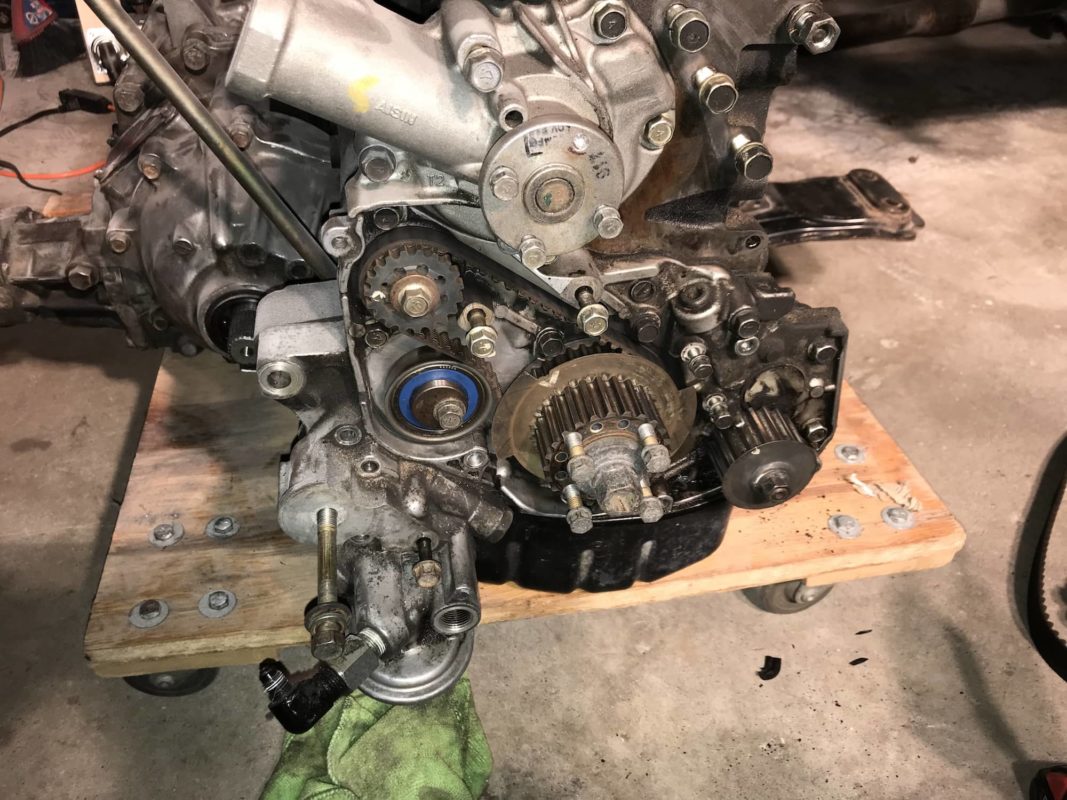 Lower timing cover is removed and we are preparing to remove the balance belt and pulleys. 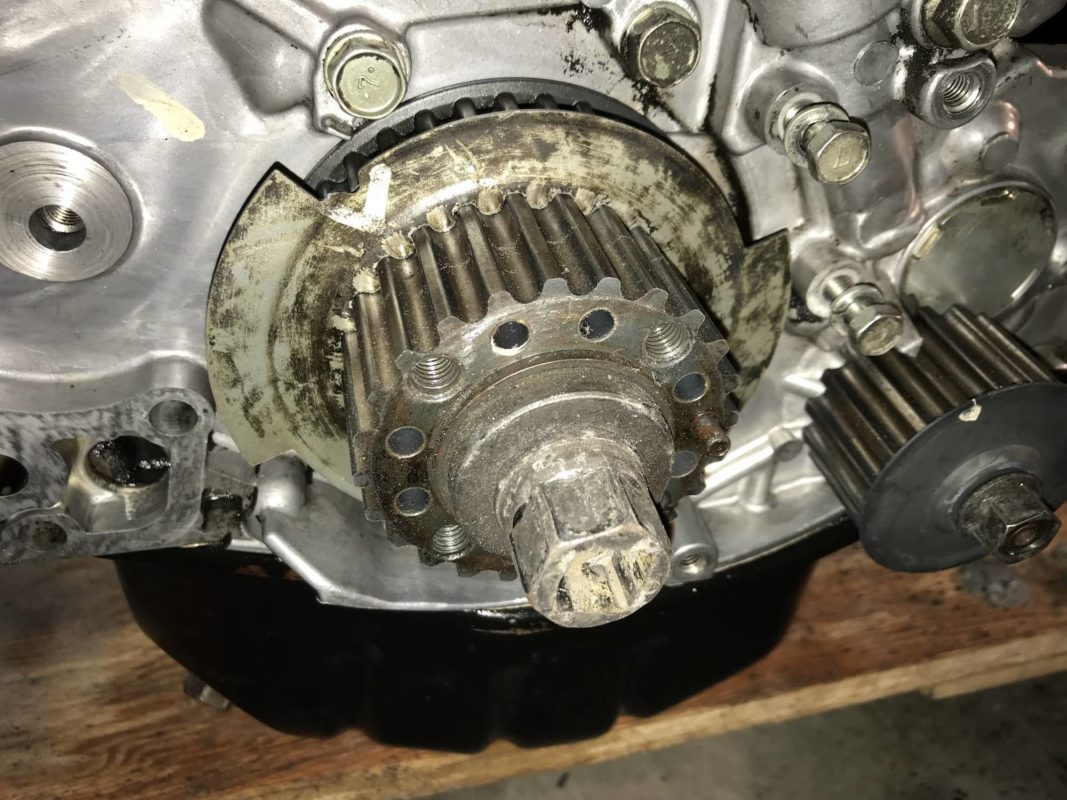 The crankshaft sprocket on the 4G63 engine... not very cooperative with us.

Now this is one of those tasks that is never easy. A lot of DSMers and Evo owners will use methods such as blipping the starter with a breaker bar resting against the ground. Well, we have a few problems with that, but even if we didn’t, the engine is out of the car, so it’s a no go.

Instead, we tried to do it the correct way. Instead of ordering a tool online, we decided to make one ourselves. With a piece 1/8″ angle steel, we drilled 2 holes 40mm apart, followed by a cut out for the shape of the washer. This is very similar to some of the commercially available tools out there. Well, 1st attempt, and the small amount of steel left around the holes was ripped apart. 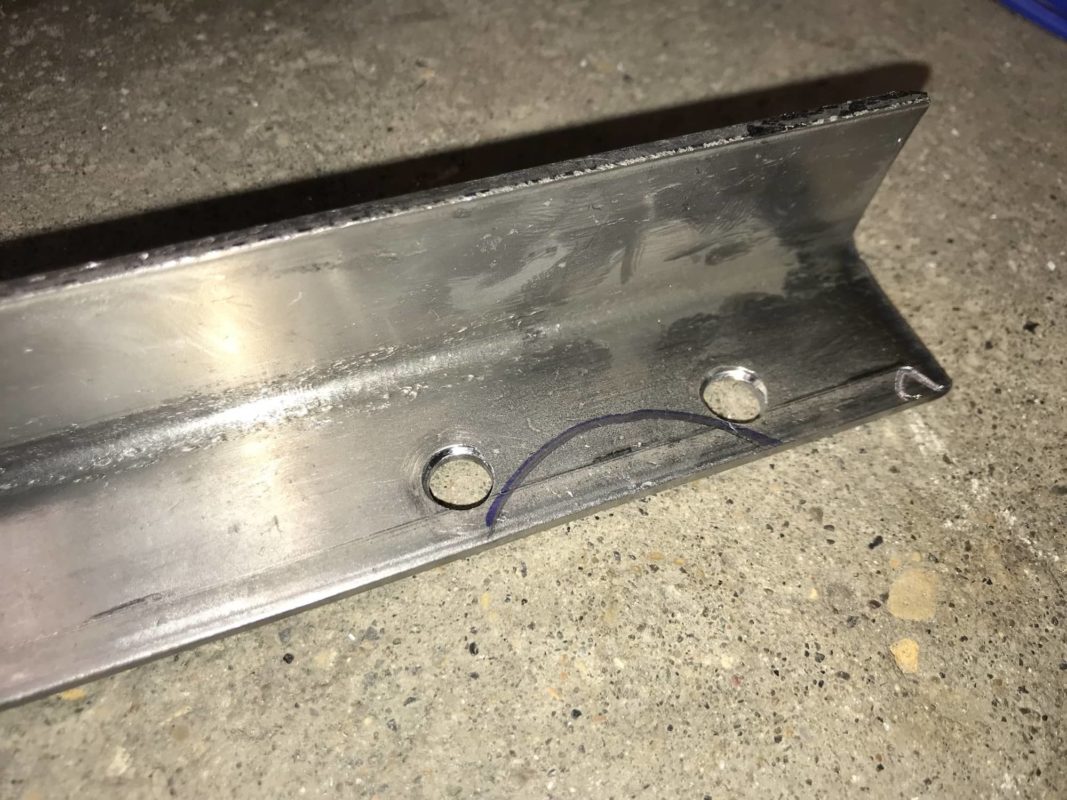 Fabbing up a tool to hold the crank pulley while removing the nut.

Second attempt at a tool. This time we drilled the 2 holes much further away from the edge of the steel. A smaller cut out was used, and the tool was offset from the crank pulley with longer screws and spacers. And guess what, the damn bar bent in half! 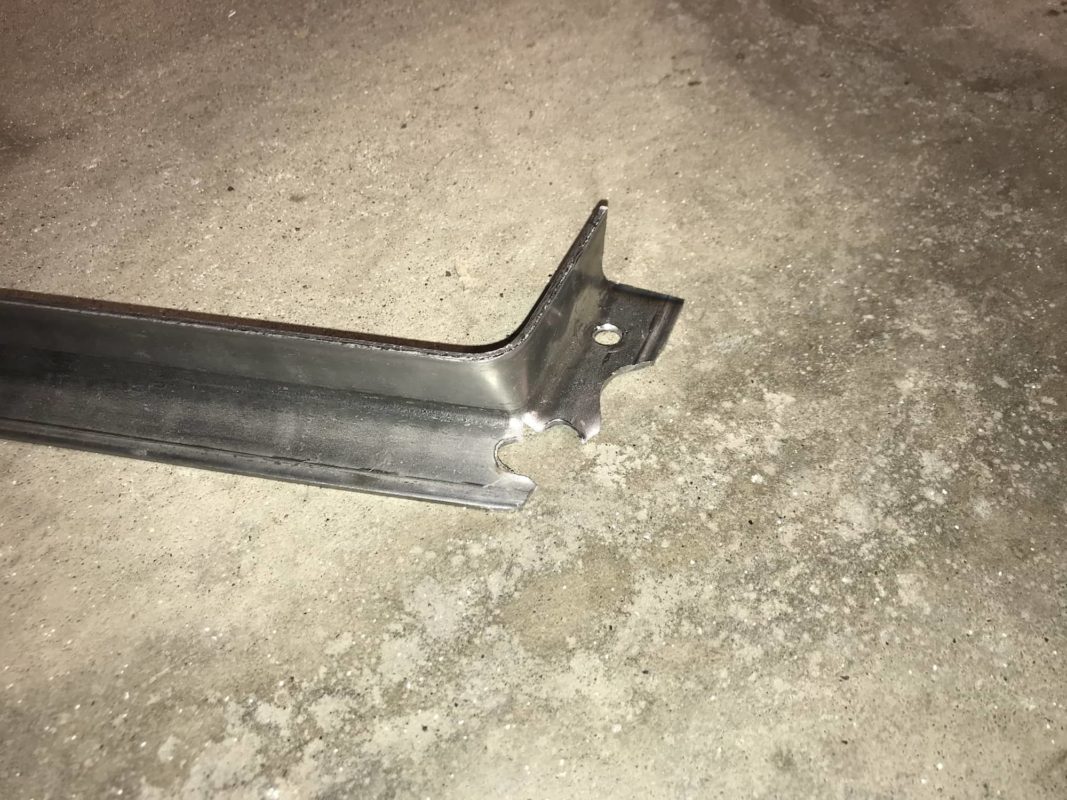 Removing the crank pulley did not go so well. The metal bracket was completely ripped apart. 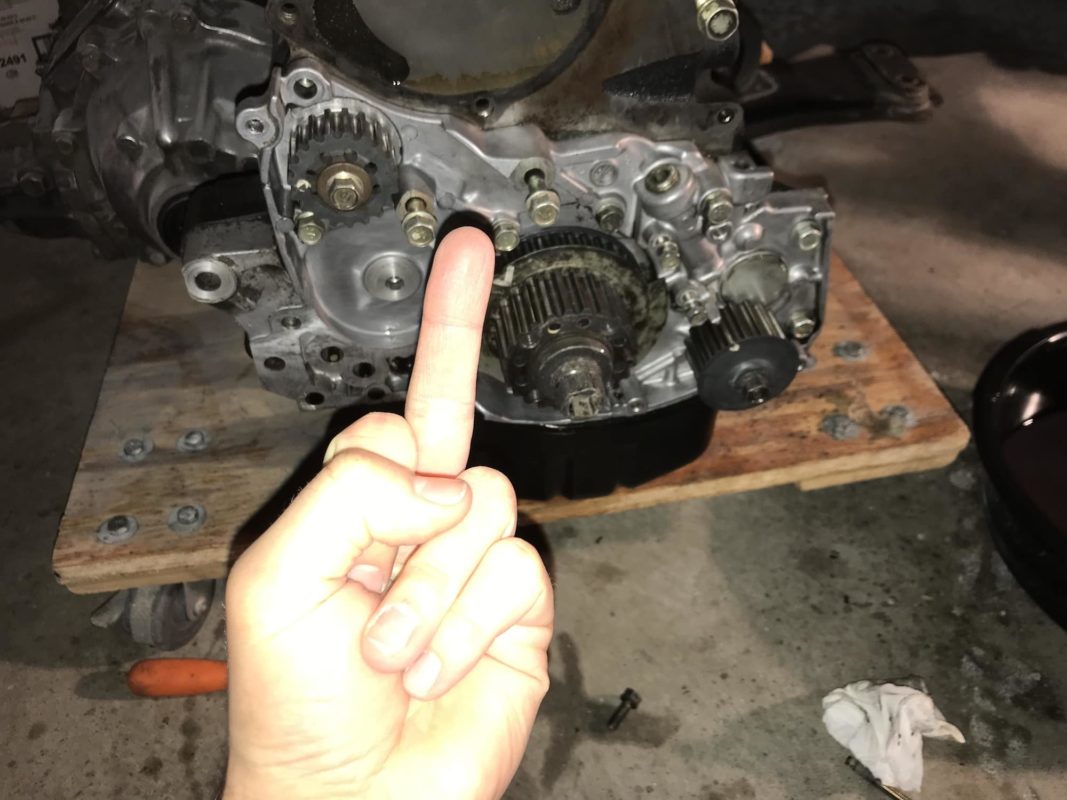 Our thoughts towards the crankshaft sprocket.

We give up for the day. Obviously, that sucker is on there. Our impact wrench won’t work, our tools won’t work. We will return to this another day when we are in the mood for a fight!

Today we made another visit to a DIY sandblasting yard. We took the valve cover, oil filter housing, coolant pipe and thermostat housing, and the engine mounts with us. After 40 minutes in the glass cabinet, we had some nice clean pieces. There really is nothing more satisfying than watching the rust and grease just stripped away. 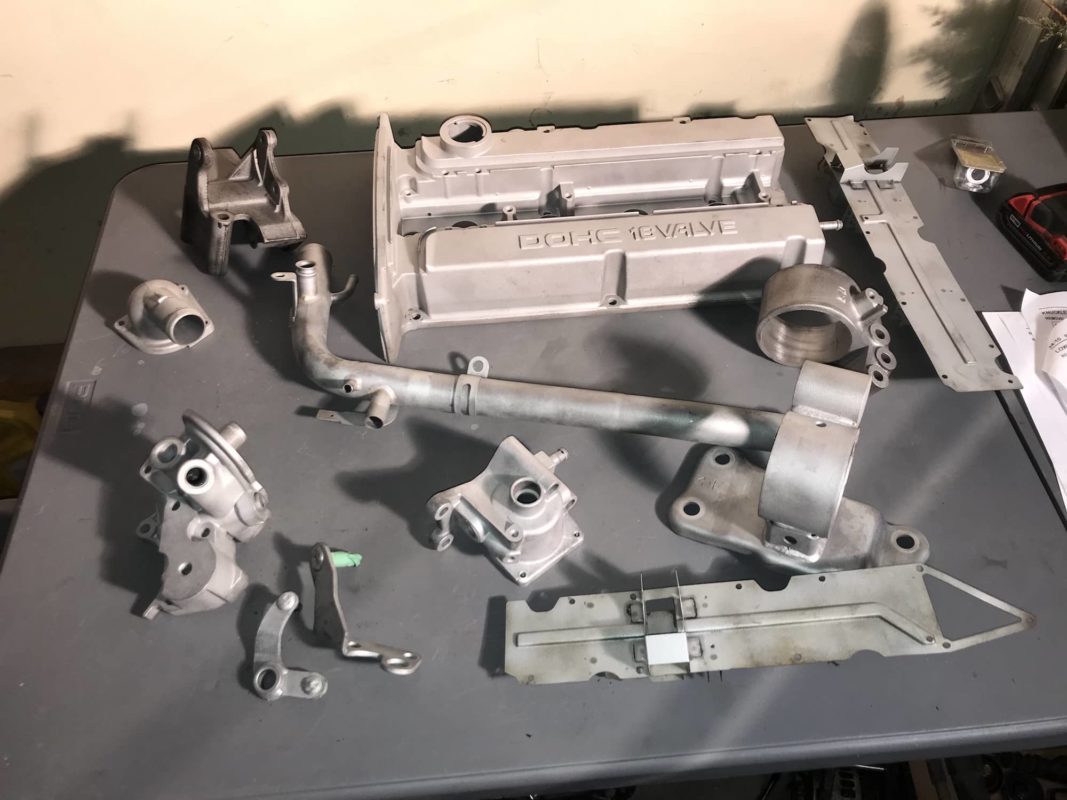 An assortment of engine parts after glass beading. 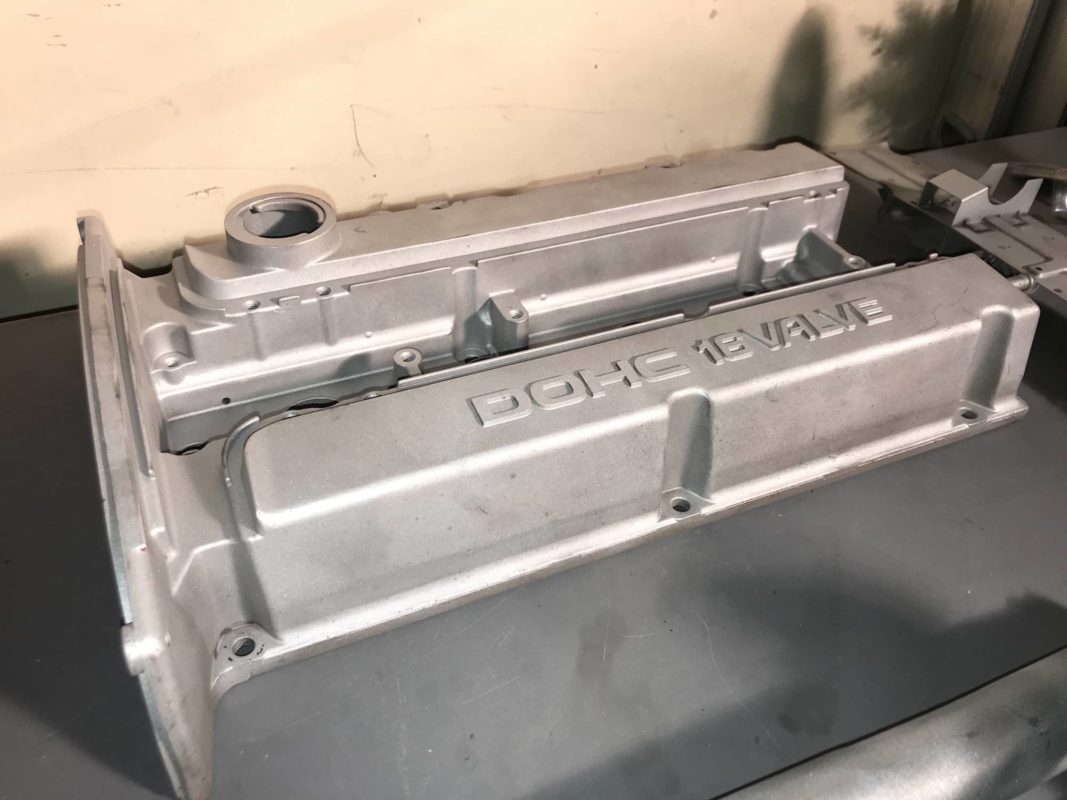 The valve cover looks pretty clean after being glass beaded.

Painting some of these pieces will be the next step for us; mainly the engine mounts. As for the valve cover, we still have a bit of work to do with tapping it for the AN fittings, but it should be ready to powdercoat within the next couple weeks.

It’s cold out. And we mean Canadian cold; far below freezing. And since the garage isn’t heated, we decided to take it pretty easy. A short bit of work was completed on the timing belt job as we pulled out the balance shaft seals and replaced them with new ones. The balance shaft belt was then installed and the new tensioner put into place. 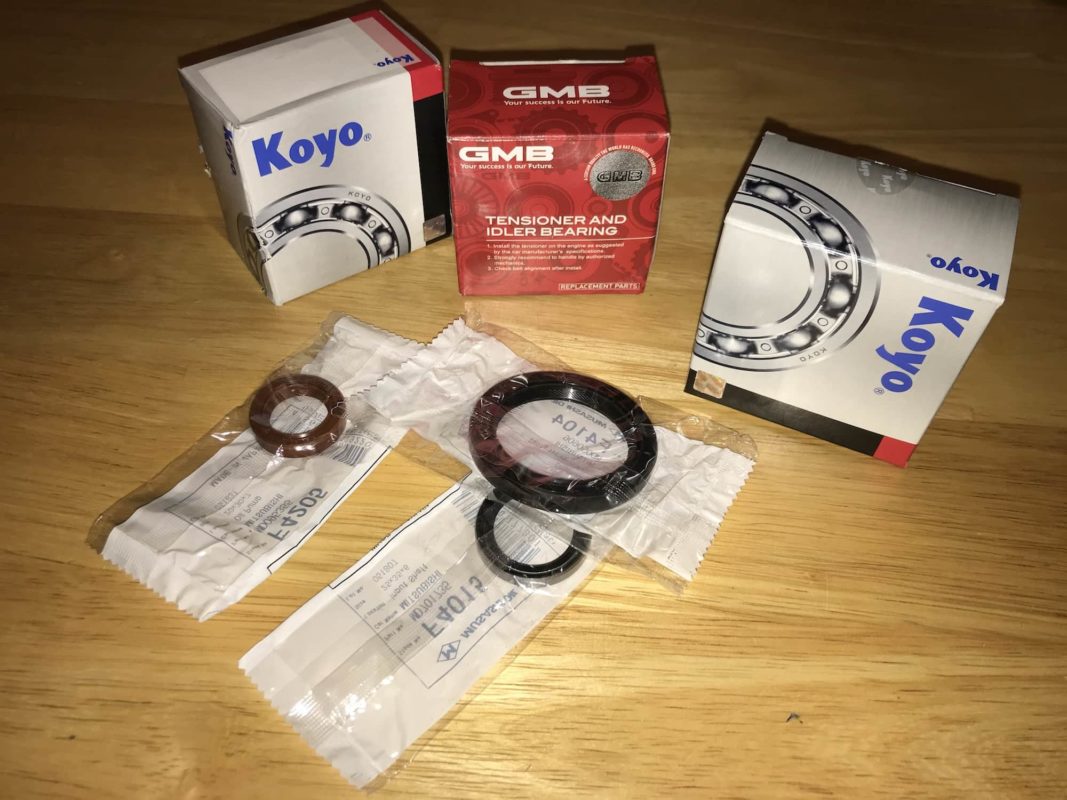 Some new seals and pulleys for the timing belt. 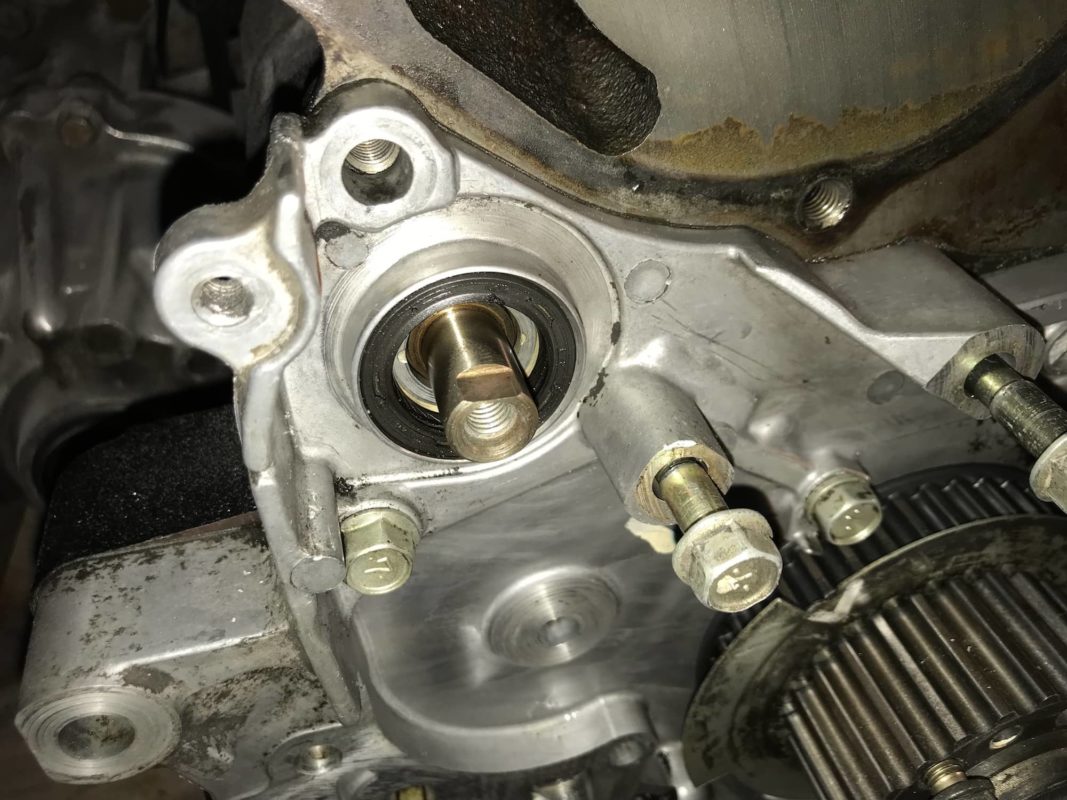 Installing the new seal on the balance shaft.

And that was it for work on the car! Short, sweet, and then time to warm up inside. But that’s ok. If work isn’t being done on the actual car, you can still find us researching and planning out other parts of the build. In the interest of keeping warm, we spent a bit of time working on the wiring diagrams for the new harness. We’re excited for the day this car starts up, so it’s sort of important to have all the wiring done properly! Stay tuned for updates on the wiring in the coming weeks.

It’s another cold day, so we’re still just messing around with the timing belt. The oil seals for the balance shafts are now installed, and the 2 sprockets are torqued down. We’ve also got the small timing belt covers back on, and they do look quite nice with some fresh paint on them. 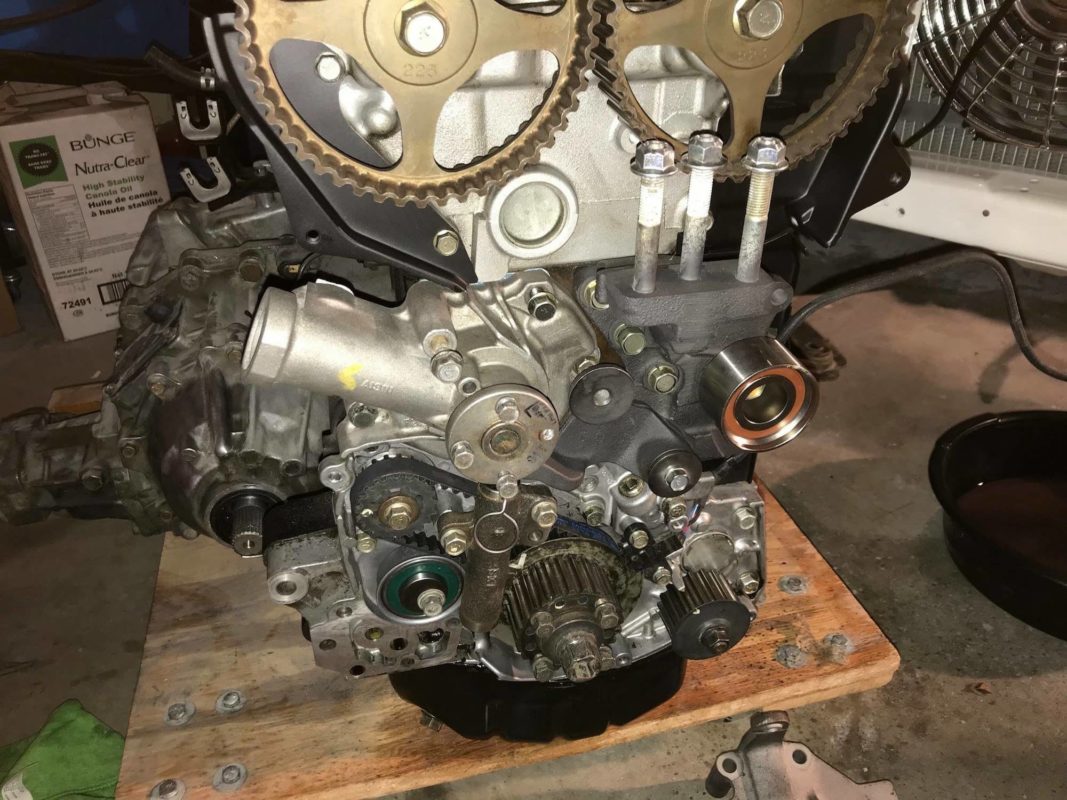 Reinstalling the new seals, pulleys, and tensioner on the Evo's engine.

The engine mount bracket is also installed. We would like to point out to anyone doing their own timing job on an Evo, there is one bolt on this bracket that requires thread sealant. It is connected to an oil channel, so ensure you add the sealant. We can describe it as the middle of the 3 bolts, but to be safe, please make sure you are following the workshop manual. It also outlines this important step.

Little by little we are getting there. The weather is supposed to start warming up in the next few days, so much more progress is expected this weekend.

Work continues on the valve cover! We are adding some -10 AN fittings to the valve cover to help alleviate some pressure issues. A couple weeks ago we started by drilling out the internal baffling. The valve cover was then taken to a DIY sandblasting yard to be glass blasted.

Today we finished a bit more on this part of the project. We started by finishing off the M5 x 0.80 taps that will hold the baffling in. Make sure to use lots of cutting oil when you do this step. We say this because a couple of our taps didn’t end up as good as we had hoped. But, we aren’t planning on removing the baffling after this, so we will likely put some JB weld in for safe measure.

After the taps were done we moved on to the breather holes. The factory nipple just isn’t going to cut it anymore. The first step was to cut off the existing nipple, and then start to drill out the larger hole. We used a step drill bit to start this, followed by a 9/16″ bit to finish. The hole was then slowly tapped with a 3/8 NPT tap. 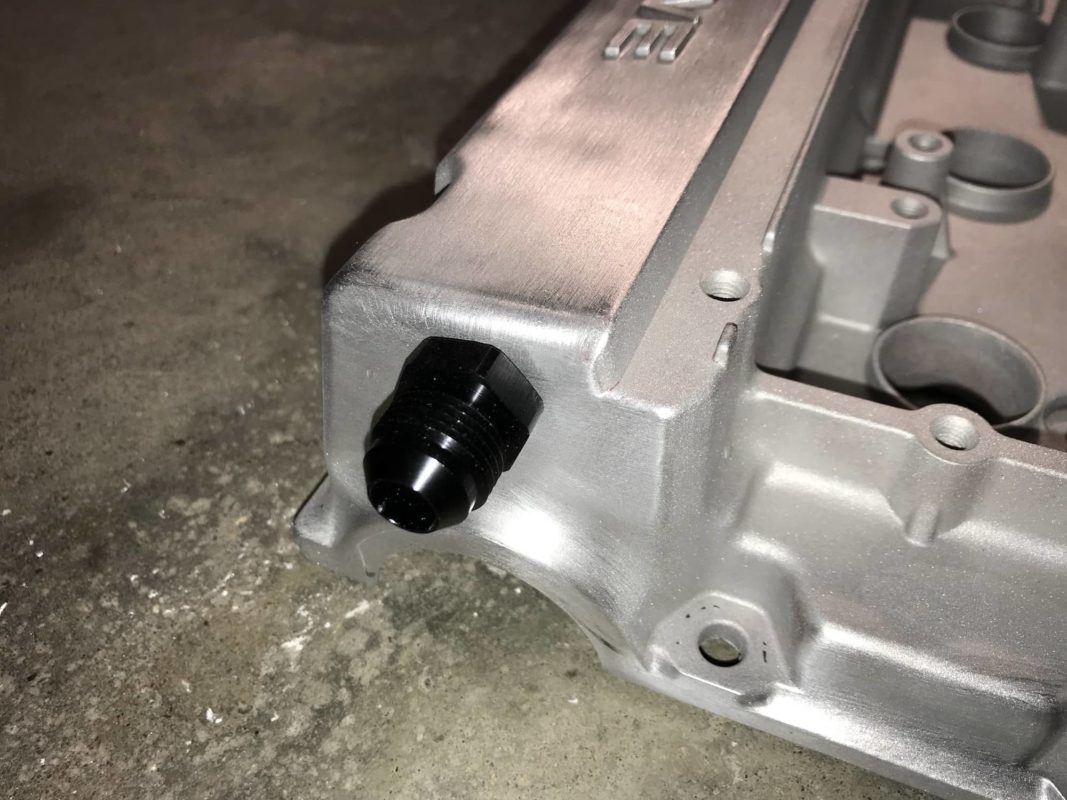 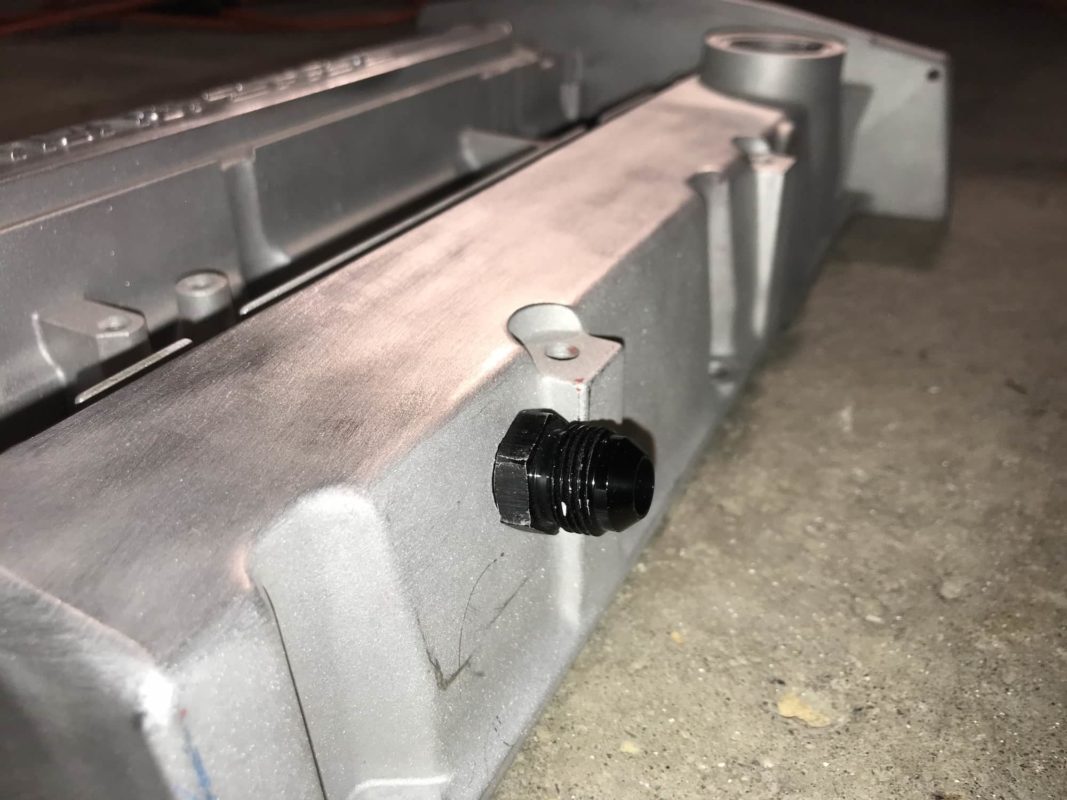 A second breather fitting was added to the rear of the valve cover. A 90 degree bend will work here for the line to clear the fuel rail and intake.

Another hole was drilled onto the rear of the valve cover for an additional breather hole. The procedure was much the same as the first. As for the PCV valve in the rear, we are going to be changing the system around. With 2 oil catch cans going into the car, this hole is instead going to be routed to one of the cans, and then to the intake. This will eliminate the PCV valve and allow maximum relief when the engine is at full boost. 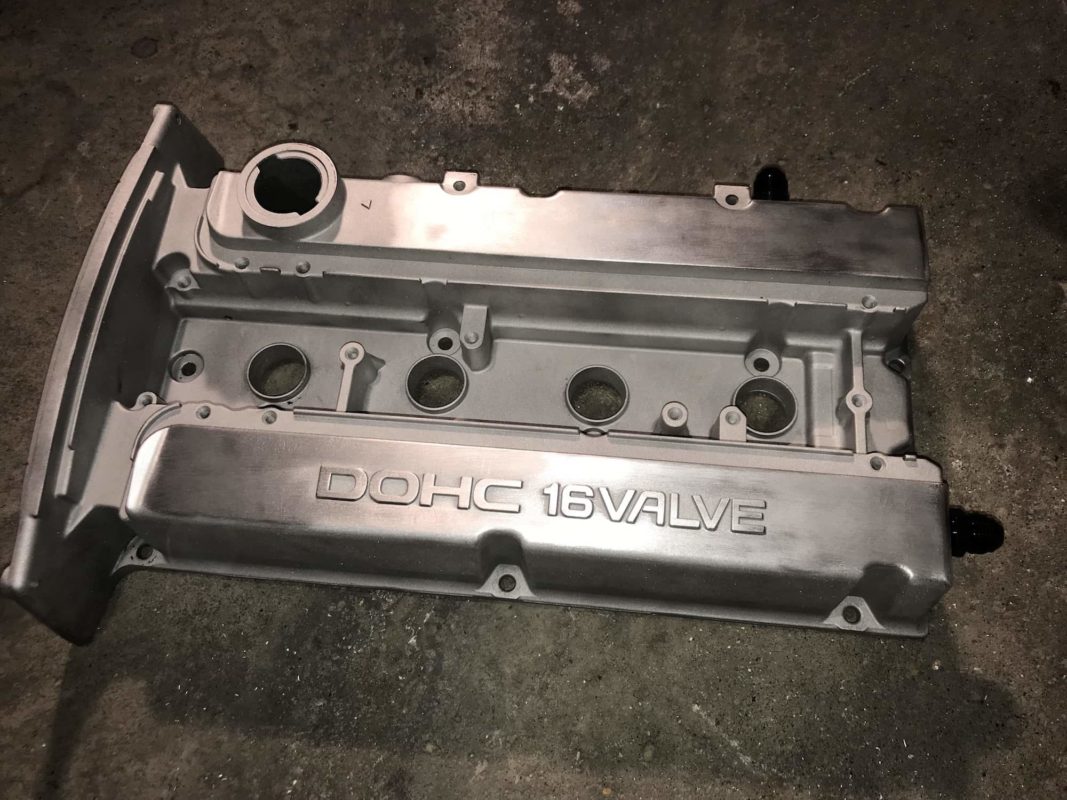 The finished valve cover. Now it just needs to be sent off for powder coating. 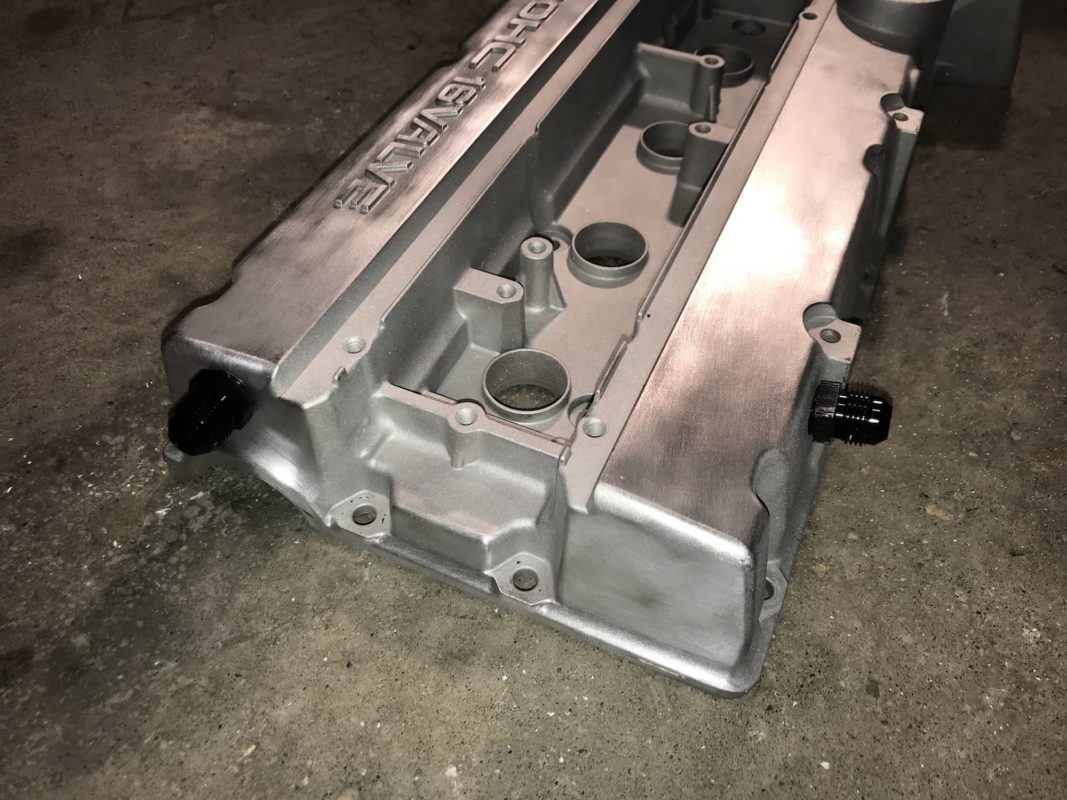 New breather fittings installed on the valve cover. -8 AN fittings should help the engine to breathe!

Now we like to stress the importance of proper planning when doing a project. But unfortunately, we’re not perfect, and sometimes end up redoing the work. In this case, when we did all of this, we used -8AN fittings. However, it wasn’t until after we were done all this that we decided we wanted to increase the size to -10 AN. So in the next few days, we are going to be picking up some -10 bulkhead fittings, and will be drilling the holes out even more.

A while back we decided we were going to convert the belt driven power steering system to an electric system. We sourced out a TRW electric power steering pump, and have since been slowly working away at the system. The latest progress on this was today when we took an angle grinder to the power steering pump bracket. 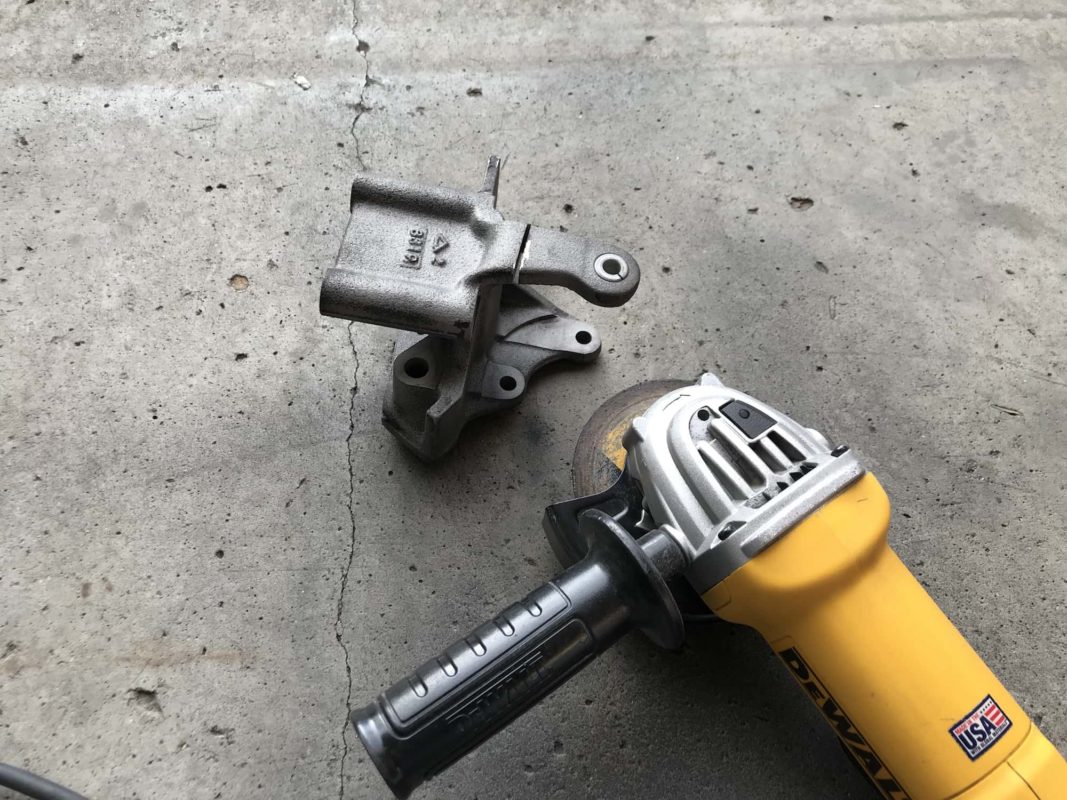 Taking an angle grinder to the power steering bracket.

The stock pump bracket serves 2 purposes; the first being to hold the pump in place. The second is to hold the idler pulley in place. It also creates a cover for part of the timing belt area. Because of this, we can’t just simply remove the bracket from the system. What we instead decided to do was spend 30 minutes with an angle grinder, slowly removing away the excess material that we no longer needed. 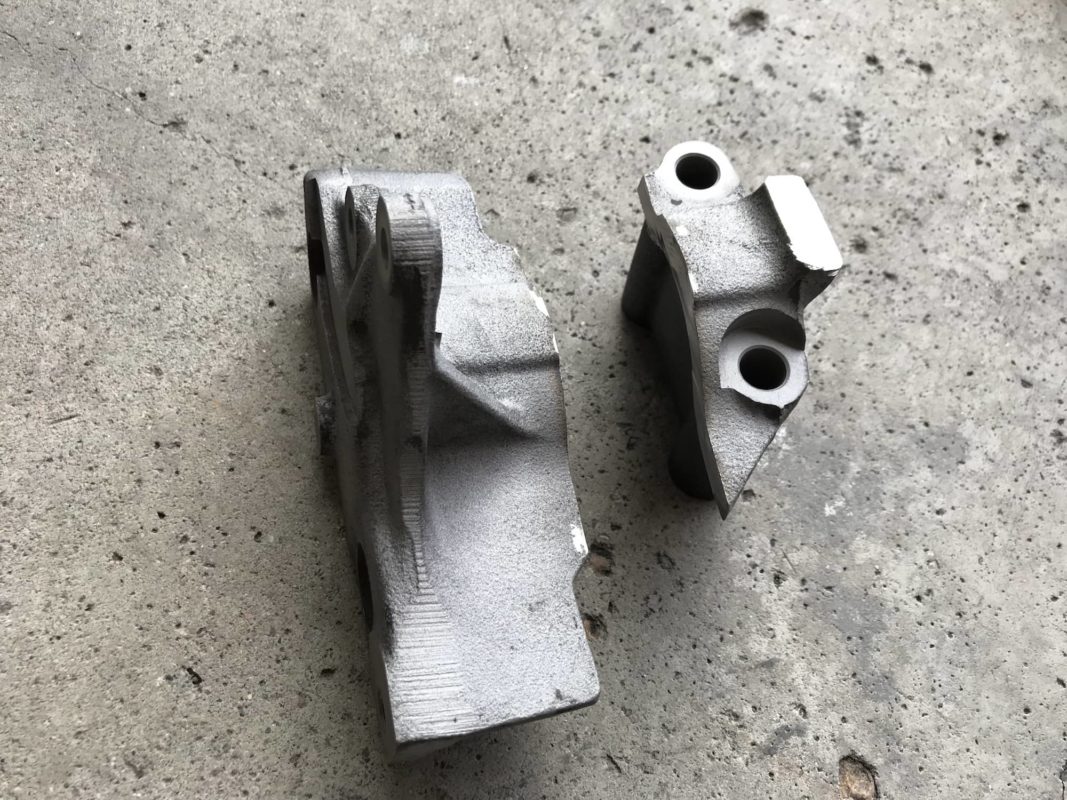 Customizing the power steering bracket. Since we are deleting the belt driven power steering pump, we have no need for the extra material on the bracket.

The results were impressive, and we were quite satisfied with the finished product. A quick coat of spray on graphite fixed up the appearance of the cast iron bracket too. We test fitted the bracket to the engine to see the results. With this bracket in place, the idler pulley also remained where it is supposed to. 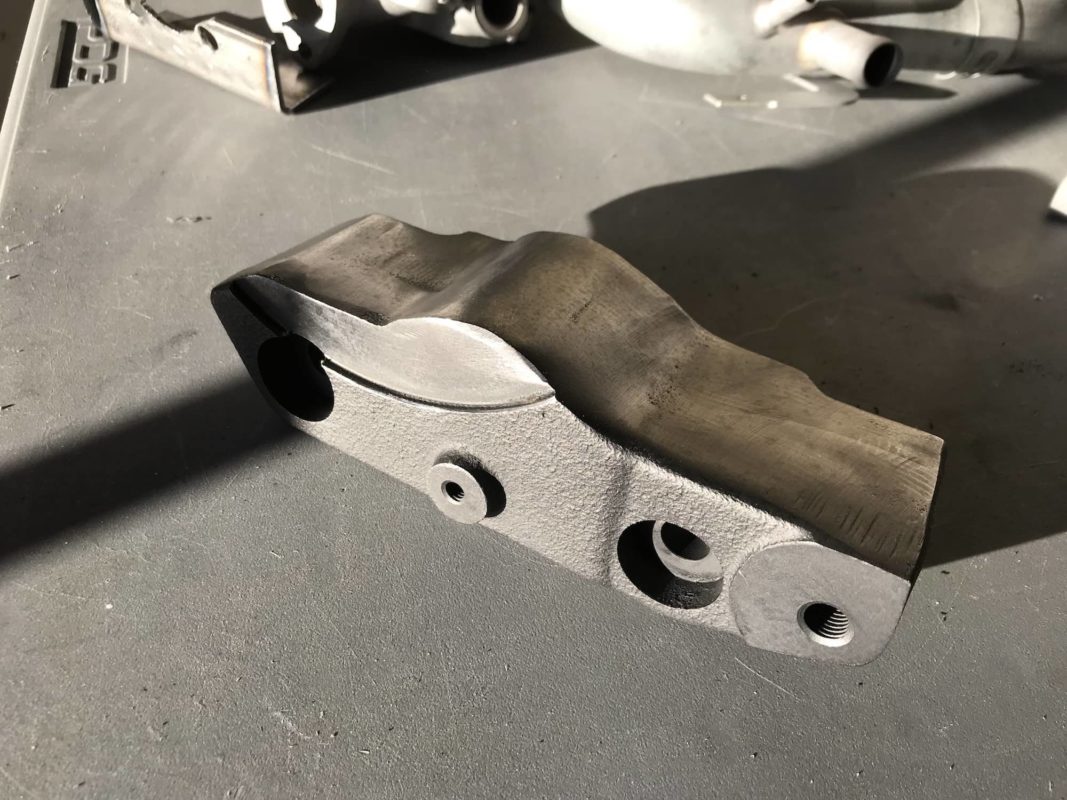 The power steering delete bracket, all finished and coated with graphite. 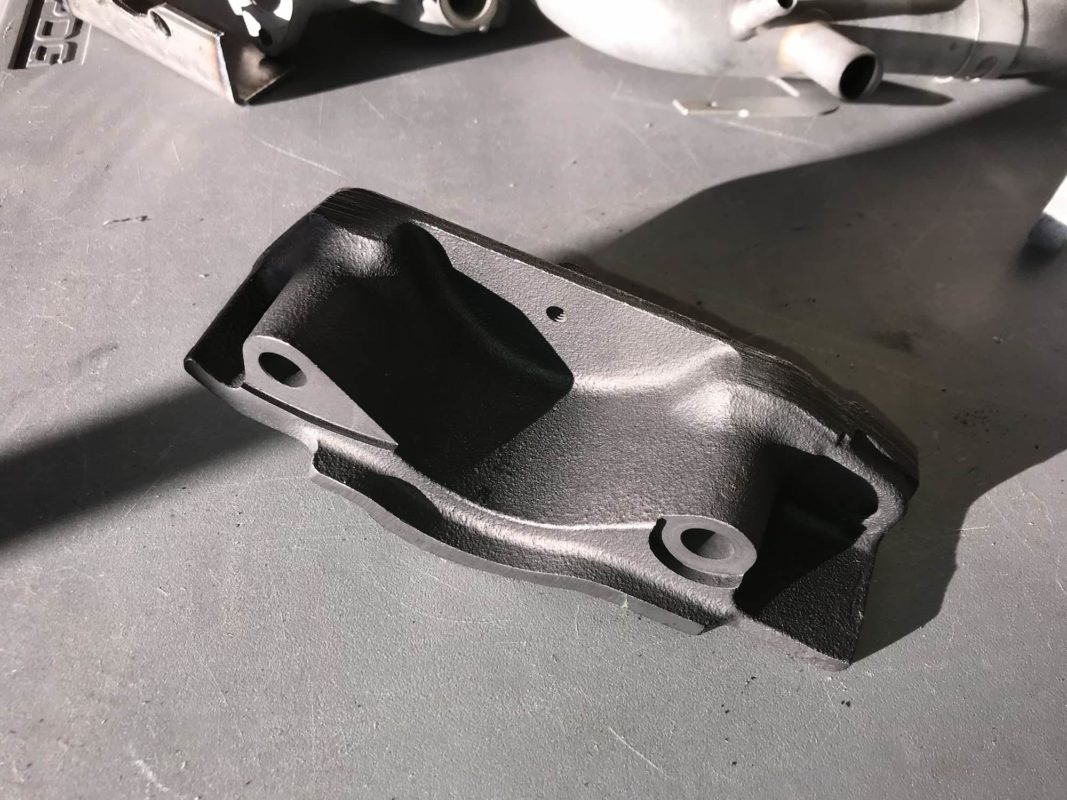 A while back, we sourced a ribbed idler pulley to take the place of the power steering pump. It is also mounted to the bracket using an aluminum spacer we fabbed up, as well as a longer bolt. Check out the pictures to see what we mean. 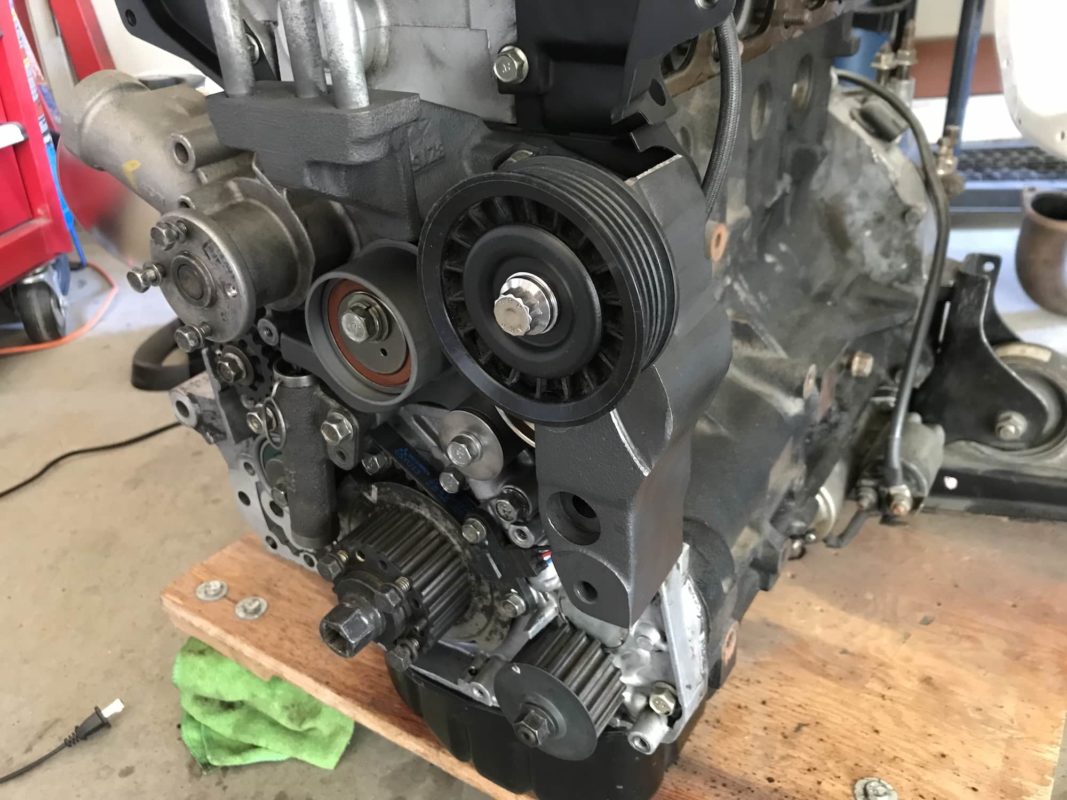 The power steering delete bracket installed, along with a new idler pulley for the serpentine belt.

Got any questions about our plans with this pump? Let us know. We’d be more than happy to explain the process.

Today we finally finished putting the timing belt back on! It was finally warm enough in the garage for us to go more than 30 minutes without freezing, so we made the best of it. This isn’t the first time we’ve done the timing belt on this car, but we still followed the workshop manual procedure. It is actually super easy by yourself with this method, and you don’t even need to buy the cam gear holder tool. 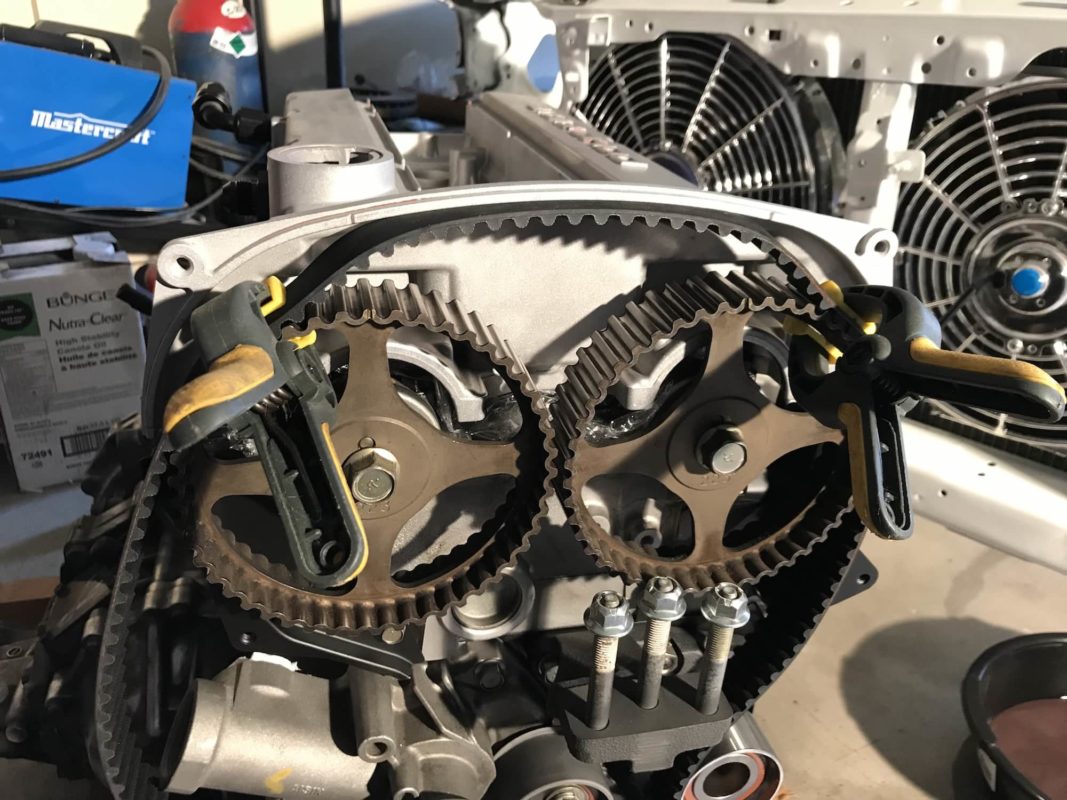 Following the workshop manual for the timing belt install made the process super easy. No need for any cam gear tool to hold them in place.

Once we had the timing belt in, we set the tensioner and gave a couple turns of the crank shaft. After 15 minutes, we checked to make sure the tension was set right. We got it on the first try!

We then moved on to some more painting of parts. This time we were painting the water hose behind the engine block, the engine mounts, and a couple other little pieces. A couple coats of black Zero Rust will do the trick. 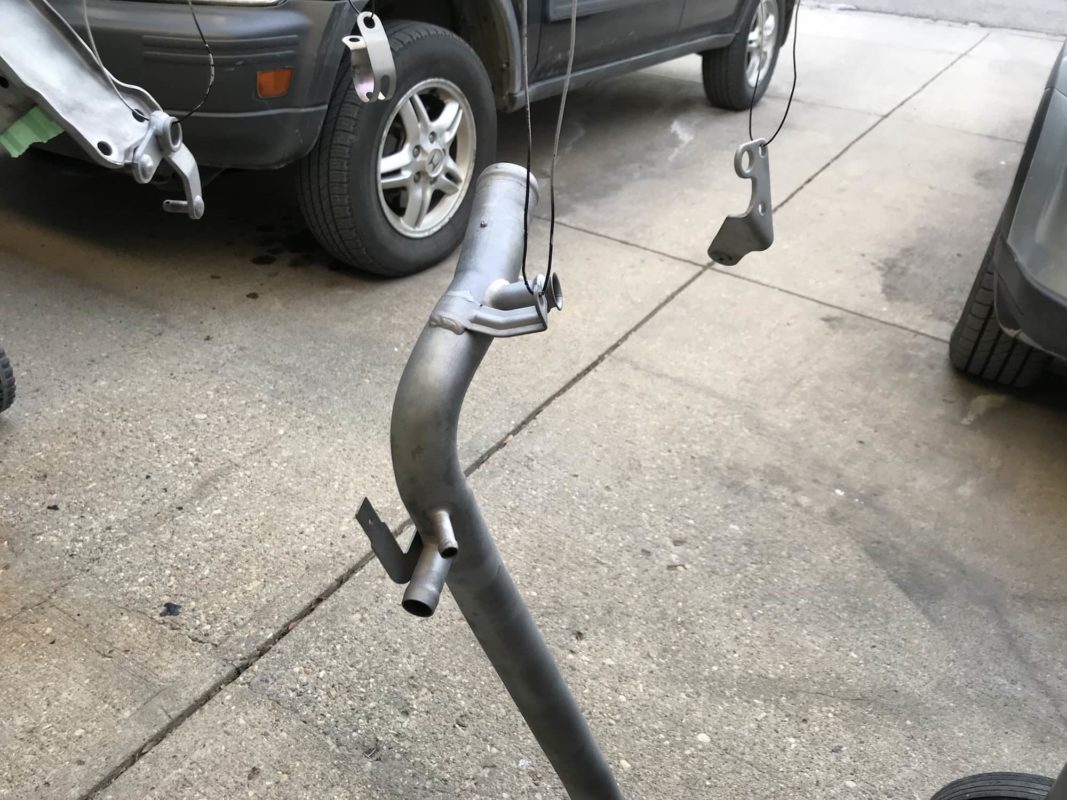 Hanging the engine parts off of a ladder. All ready to be painted. 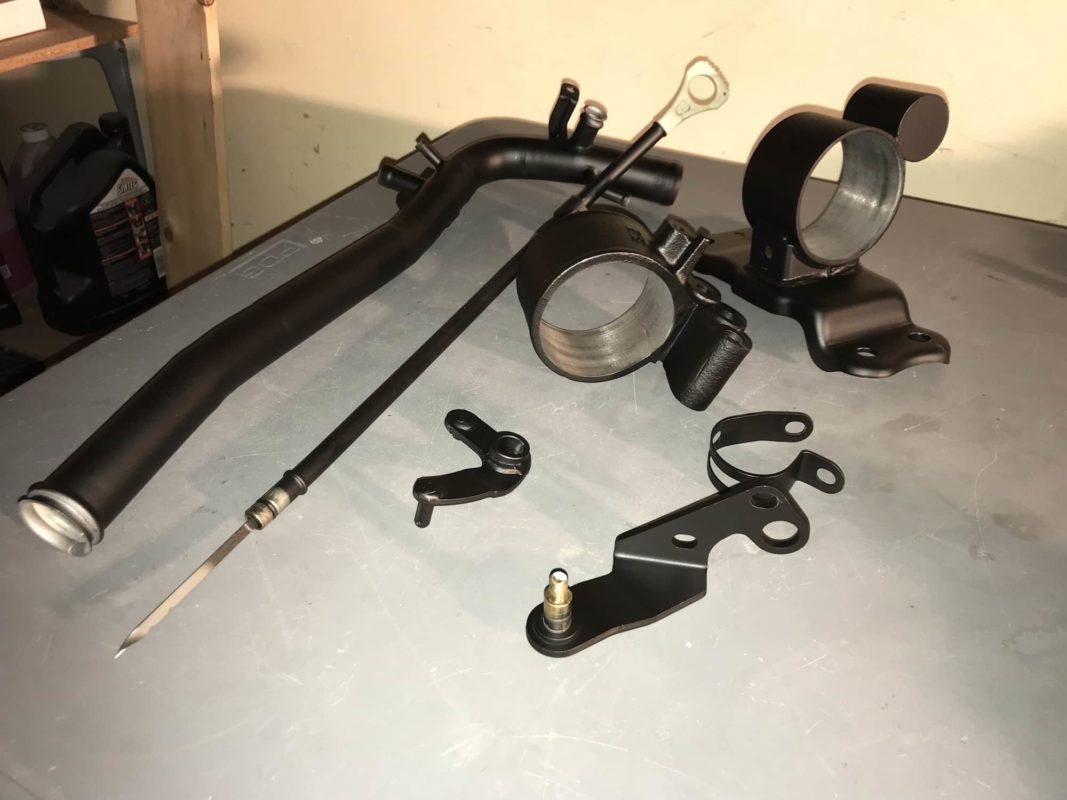 These parts were painted with a product called Zero Rust. It is similar to POR-15. 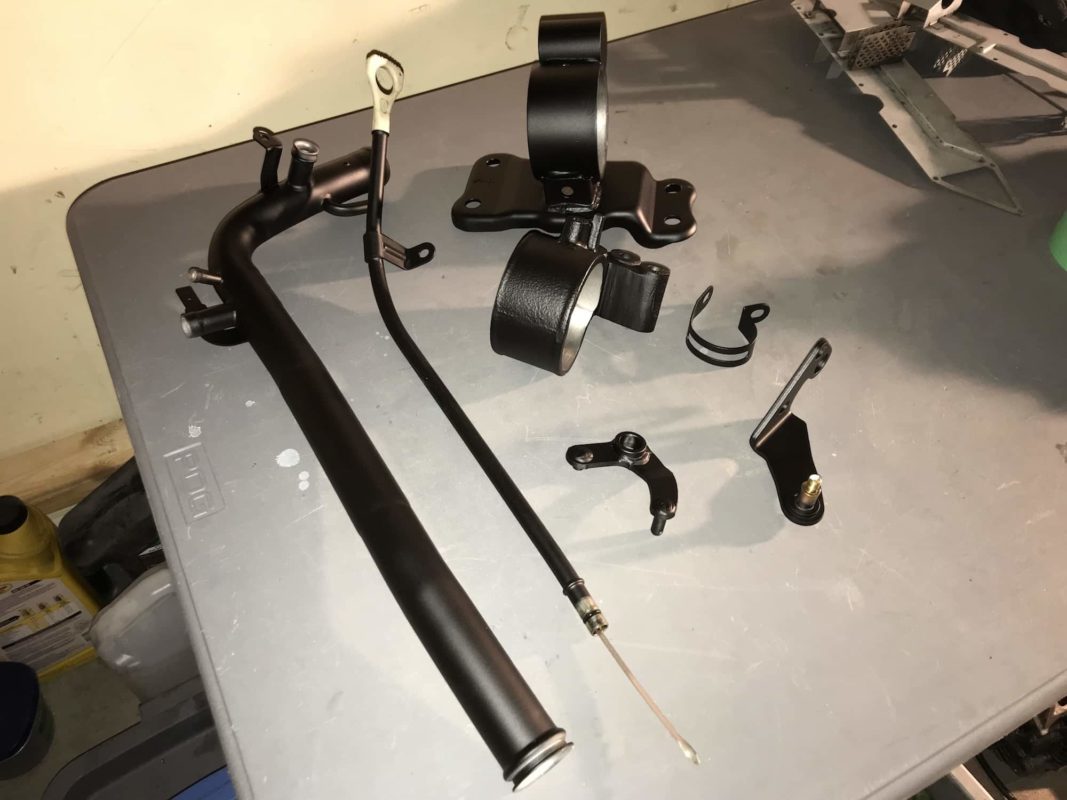 The results of the painting. These parts look awesome and will really help to clean up the appearance of the engine bay.
About