This was a fun car to work on. Sure, the engine bay was overcrowded and the turbo was difficult to access behind the engine, but we enjoyed it none the less.

To up the power, the vehicle was originally running a GM stage 1 tune, but this was quickly replaced with a Trifecta tune running 27 psi. The power and boost were exceptional, however getting all of it to the pavement was an issue. We found ourselves constantly spinning tires, even in 4th gear! If we had held on to this car any longer, we would have likely replaced the tires to try and achieve some more traction.

The car was also given some appearance modifications throughout its time with us. These included a carbon fiber hood with hood pins, HID halo headlights and foglights, A-pillar gauges, and a custom E-brake handle. We even carbon fiber wrapped some of the trim pieces to try and make the interior a bit more exciting.

Now we know, it’s not the most impressive car ever. A lot of people love to have a chuckle at the Cobalts; commonly seen as a rental car. But we have to be honest; the turbocharged version was a lot of fun. With a limited slip differential, the cornering was quite impressive. The power was also pretty decent, considering the price of these cars has come down so much. Ours was easily running in the low 300 hp with the boost turned to 27psi. And it doesn’t cost very much to get to this power level. The car started with 260hp from the factory, upped to 290hp with just a simple GM tune.

So yes, even though it’s just a FWD car with a rental car status (base model of course), we were none the less impressed with it. It was a great car to work on, and a lot of the lessons we learned from it have been applied to our newest build; the Budget Time Attack Evo 6. Learning and experiences are irreplaceable, and we wouldn’t have it any other way. We salute our old Cobalt, and only wish we would have taken more pictures of it before it was sold!

Check out the post below we did on this Cobalt SS. 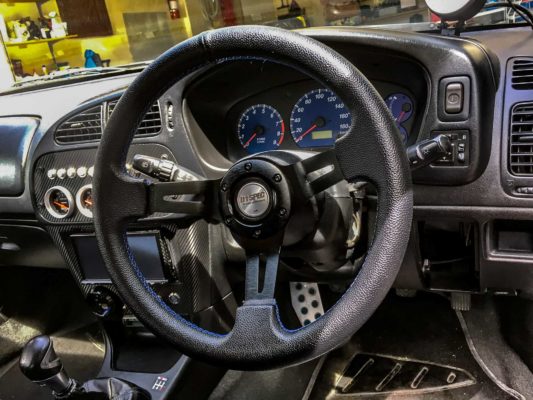 Make your own personalized interior without permanently altering your car! Modifying a car has a [...]